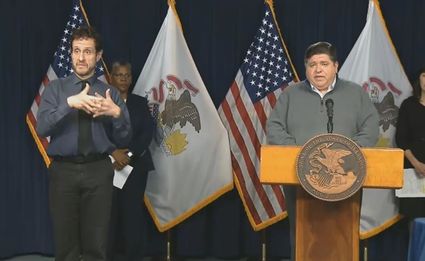 Pritzker said the state is also working on collecting numbers of hospitalizations caused by COVID-19.

"We've been piecing it together. But in terms of our ability to report that on a regular basis to all of you, we're making sure that we're doing that we'll be working on that over the weekend," he said.

There are now 3,026 confirmed cases and 34 deaths tied to the virus in the state, while approximately 86 percent of fatalities have been in people over 60 years of age. Experts have also repeatedly warned a lack of testing means the actual total is probably much higher, as only 21,542 tests have been conducted in the state.

Pritzker said at the briefing "there's a limit to the number of tests we can do," although the number of those tested is increasing into the thousands daily.

"So we're increasing the tests, but not enough. ... There's a vast majority more people out there who have COVID-19 than we are currently testing," Pritzker said. "And in many places, many hospitals are simply assuming that if you have a deep respiratory, cough, trouble breathing and a fever, that without even testing, they're often now just assuming you are COVID-positive because they don't have a test to offer to everybody."

Pritzker said "we would know so much more now" had the federal government acted quicker to make testing available, which might have meant the state would have enacted social distancing measures earlier.

"It will prioritize Americans over foreign countries and allow states on the front lines to access the equipment we so badly need," Pritzker said. "He needed ... to activate the Defense Production Act weeks ago or even yesterday, but it still will make a massive difference in our national health care system if he simply moves quickly."

Trump issued a statement Friday afternoon saying he would do so to require General Motors to "accept, perform, and prioritize federal contracts for ventilators," and Pritzker said it was good news.

"So I'm so pleased to hear that there's some movement, but that's only GM. That's terrific. But we need more, we need much more," Pritzker said.

The governor said the market for medical equipment and personal protective equipment, or PPE, is "like the Wild West," and states are competing against each other as well as the federal government and foreign nations in their attempts to procure the medical gear.

Pritzker said he has a team working to procure medical equipment at the state level, and another shipment of N95 masks was recently received.

The governor also called on all licensed health care professionals in the state to sign up for a new emergency alert system at illinoishelps.net.

"This includes all physicians, nurse practitioners, registered nurses, physician's assistants, respiratory specialists, medics, (licensed practical nurses), certified nursing assistants, podiatrists, dentists, anyone who has made a career in the medical profession," he said. "... By signing up you'll be joining an alert system that, when activated, will ask you to deploy to assist in our response to urgent needs during this public health crisis."

Later, Ezike said there are numerous tasks those professionals could take part in, including some that would be undertaken remotely.

"Some would be direct care. We know that some people who will be coming back might be over the age that we wouldn't want them to be in contact with the public and risk being affected. But those people could absolutely practice telehealth, telemedicine," she said.

Pritzker also said he was awaiting the president's signature on a "very important" $2.2 trillion emergency aid packages which will direct funds to governments, hospitals and even private citizens, among others. Trump signed the bill soon after Friday's news conference.

The governor announced the expansion of SNAP, or Supplemental Nutrition Assistance Program, benefits. According to the governor's office, a combination of federal law and the state's requests for special waivers from the U.S. Department of Agriculture will mean $80 million more in federal money for SNAP benefits to Illinoisans.

"SNAP is a federally funded program that puts food on the table for nearly 900,000 Illinois households, feeding over 1.7 million people in our state and stimulating our economy," said Illinois Department of Human Services Secretary Grace Hou, noting benefits could nearly double for some Illinoisans.

The governor's office also announced $6 million in new funding to support the 19 Continuums of Care for homeless persons across the state, along with $2 million to support housing and other services for people experiencing homelessness.

"DHS has gone through its budget with a fine-tooth comb, and redirected millions of additional dollars to address all aspects of homelessness assistance statewide, with a focus on expanding our ability to offer temporary shelter," Pritzker said. 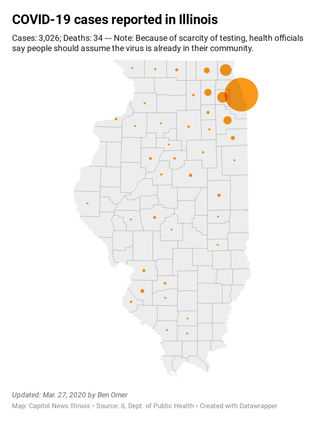 Applications for the stipend will be available Monday to providers through their local Child Care Resource and Referral agency, and more information on child care providers is available at https://emergencycare.inccrra.org/ or by calling the state's toll free number at 888-228-1146.

Meanwhile, the number of National Guard members activated in the state has grown to about 200. Their work has been civil in nature, including setting up testing centers. On its Twitter page, the state's National Guard announced the latest call-up of 50 soldiers based in East St. Louis, who will support medical warehouse operations.

Pritzker also issued another executive order Friday suspending testing requirements and giving the state superintendent of schools authority to address the minimum number of school days as well as the definition of remote learning days among other education-related measures.