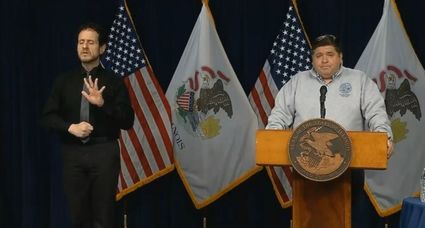 Gov. JB Pritzker discusses the latest measures the state is taking to control the COVID-19 outbreak in Illinois during a news conference Saturday in Chicago.

The Illinois Department of Public Health announced Saturday it has confirmed 13 new deaths from the novel coronavirus disease, COVID-19, including an infant in Cook County who had tested positive.

IDPH Director Dr. Ngozi Ezike said during a daily media briefing in Chicago with Gov. JB Pritzker that a full investigation is underway to determine if the cause of death. If COVID-19 is confirmed to be the cause, it would mark the first infant death from the disease in Illinois.

Ezike said it is rare for an infant to die of the disease and that most people recover. Of those who die, she said, 85 percent are over the age of 60, but she said that should serve as a warning for everyone to avoid exposure.

"Even if you might only have a mild illness, that same illness spread to someone else could have a very tragic result," she said.

Pritzker said the latest deaths also included a state employee in the Department of Human Services.

"I know how difficult this news can be, especially about this very young child," he said in an especially somber tone. "Upon hearing it, I admit I was immediately shaken and it's appropriate for any of us to grieve today. It's especially sorrowful for the family of this very small child, for the years stolen from this infant."

All of the latest deaths were reported in the Chicago area and the collar counties. There were eight in Cook County, two in Kane County and one each in McHenry, Lake and Will counties. All but the infant were over the age of 60. Two were in their nineties.

The latest numbers bring the total number of confirmed COVID-19 cases in Illinois to 3,491 with 47 deaths. The disease has now been detected in 43 counties, although Chicago and its suburbs have seen the heaviest concentration of cases.

Officials have repeatedly stressed that the actual number is probably much higher because many people displaying symptoms of the disease have not been tested. Some of the rapidly-rising case numbers are attributable to increased testing.

Pritzker said that to help meet the growing need for hospital space there, the city of Chicago and the U.S. Army Corps of Engineers are working to convert the McCormick Place Convention Center into a field hospital. He said details of that project would be released in the next few days.

To help make sure all Illinoisans have access to health care, Pritzker said his administration is seeking waivers from the federal government to make Medicaid more accessible. Those include requests to suspend the annual renewal process, to fast-track enrollment by waiving many of the verification requirements, guaranteeing that people who are uninsured will have their costs covered and covering all out-of-pocket costs for people who have regular insurance.

Pritzker also announced that after discussions with the Illinois Retail Merchants Association, grocery stores throughout the state will soon start implementing a new set of "best practices" to prevent the virus from spreading in stores. 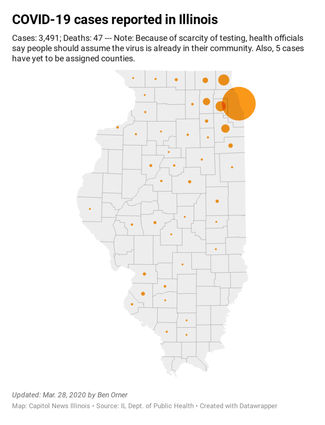 Customers will soon see signs at the entrance and hear regular announcements on the public address systems reminding them to maintain six feet of separation from fellow shoppers. Stores will also place markers on the floor near checkout aisles indicating where people should stand.

Other measures include installing shield guards at checkout counters to protect employees, a temporary prohibition on reusable bags, offering the option of curbside pickup and encouraging the use of self-service checkout.

Saturday marked the end of the first full week of the stay-at-home order that Pritzker ordered as part of an effort to slow the spread of the disease. That order, along with an order closing all public and private K-12 schools are set to continue through April 7, but it may be extended depending on the state of the pandemic at that time.