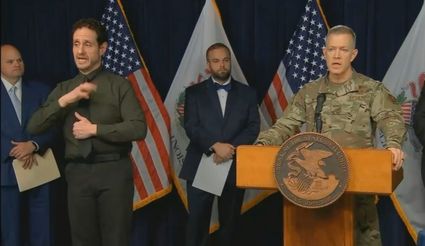 Brig. Gen. Richard Neely, adjutant general of the Illinois National Guard, addresses rumors about the Guard's involvement in the state's response to the coronavirus outbreak during a news conference Monday in Chicago. He said the Guard is assisting by setting up testing centers and other civil action, not preparing for military action as has been rumored on social media.

SPRINGFIELD – The Illinois National Guard is assisting the state's COVID-19 response by setting up testing centers and other civil action, not preparing for military action as has been rumored on social media, its adjutant general said during a news briefing on the virus Monday.

Pritzker's disaster proclamation on March 9 authorized Army and Air National Guard soldiers to help with these state's response to COVID-19. Since then, soldiers have been providing civil, medical and logistical assistance, including engineering and HVAC duties.

"These are your citizen soldiers ... that are trained in many different skillsets," Neely said.

Neely said the Guard has begun setting up testing centers and some members have even tested health care workers and first responders for COVID-19 in Rosemont, with greater public testing upcoming. He said other soldiers are helping distribution of medical equipment, while a "specialized engineering team" is surveying closed-down hospital sites.

"They're actually looking at the heating, the plumbing, the electrical throughout those facilities and identifying which ones are easy to quickly turn on if we need that additional capacity and which are not," Neely said.

The Illinois National Guard has also been active on its Twitter account (@IL_Natl_Guard), replying directly to social media users' fears, questions and even conspiracies regarding the Guard's presence.

In recent days, the account has tried to clear up popular videos showing armored vehicles driving on Illinois roads and being transported by train.

"The train moving military equipment is not moving National Guard vehicles," read a tweet on Thursday. "The military moves vehicles all the time. Relax, folks! :)."

The Guard's account has also tweeted confirmations in recent days that soldiers are not shutting down highways, setting up driver checkpoints or preparing to enforce a national quarantine.

"Disinformation can tear us apart. We are part of the community, we live and work alongside you every day," read part of a tweet thread on Friday. "When you see something you question, or that doesn't seem 'normal,' ask us, we're here to make sure you're informed."

Each U.S. state, the District of Columbia and the territories of Puerto Rico, Guam and the U.S. Virgin Islands has its own National Guard. It is the only American military force that can function in a non-military way. 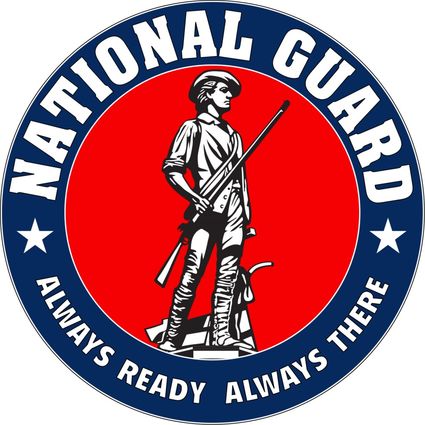 Illinois' Guard, for example, has been previously activated during the Pritzker administration to help with flooding preparation and recovery along the Mississippi River.

The Guard's functions range from non-emergency situations to enforcement of martial law when state and local law enforcement can no longer keep the peace. But even though soldiers are dressed in military uniforms, Neely said, that does not mean they are performing military duties.