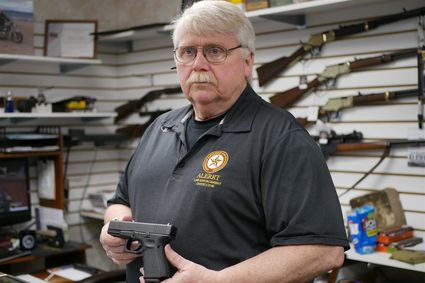 Jim Feagans holds a handgun while standing behind the counter of his Springfield gun store on Wednesday. Feagans said his store has seen a surge in firearm and ammunition purchases amid concerns over the novel coronavirus disease, COVID-19.

SPRINGFIELD – Toilet paper and hand sanitizer are in short supply at Illinois supermarkets. At gun shops, firearms and ammunition are flying off the shelves, too.

As the outbreak of novel coronavirus disease, COVID-19, spreads through the state and the country, Illinois firearms retailers say sales of guns and ammunition have substantially increased over the past two weeks and especially in recent days.

"It's a lot of a panic situation," said Jim Feagans, who owns J. Gooch Shooting Sports in Springfield. "Firearms and ammunition are going crazy."

Feagans said his shop started getting busy Monday, on the eve of Illinois restaurants and bars closing to dine-in customers and schools shutting their doors to students.

"I think ... all of a sudden people realized, 'Hey, this is serious,'" he said. "Everybody's talking long term now. So now I think people are starting to get a little bit more panicky."

"People are panicking," an employee at the surplus store said.

Gun shops across the U.S. and in every corner of Illinois have seen firearm and ammunition sales increase, says Richard Pearson, executive director of the Illinois State Rifle Association. He said most purchases have been related to home protection.

Gun shops agreed. Feagans said purchases of handguns, common for home protection, have gone up the most, along with ammunition. He also noted his recent clientele has included an unusual number of first-time buyers.

"Even the non-firearms people are wanting firearms," he said. "We've got a lot of new people who have never had guns before coming in."

Though Feagans said no customer has told him their purchase is related to coronavirus, he suspects people might be preparing for a worst-case scenario.

"I can only speculate that they're worried that it's going to get worse before it gets better," he said. "And maybe they need something to protect themselves, whether it's going to be looting or something."

Pearson said he knows of some Illinois gun shops that are limiting the number of rounds of ammunition per purchase so the most panicked people don't hoard the supply.

Feagans recalled the last time his shop was this busy was in 2013, when people were worried that governments would restrict access to guns after the Sandy Hook Elementary School shooting in Connecticut.

In order to buy a gun in Illinois, residents must first be licensed with a Firearm Owners Identification (FOID) card, which requires a background check. And every gun they buy requires a Firearms Transfer Inquiry Program (FTIP) request.

Recent numbers for FOID card applications, FTIPs and concealed carry license applications were not immediately available because ISP is "operating on essential personnel only" amid the COVID-19 pandemic, a spokesperson said.

Capitol News Illinois is awaiting response to a submitted Freedom of Information Act request for the data. Multiple calls Wednesday to ISP's Firearms Services Bureau were answered by a recorded message that said the bureau was "experiencing a high call volume." 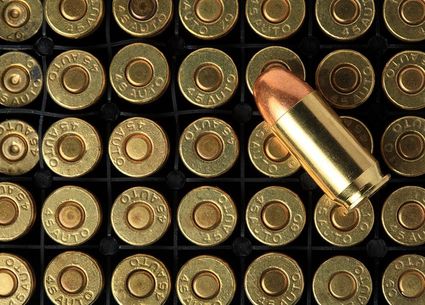 A Tuesday article from Time magazine said specific data on the size of the nationwide surge in gun sales will not be available until April, but the article noted that FBI background checks are "up considerably" over last January and February.

Illinois' minimum age for buying a firearm is 18 for long guns and 21 for handguns and pistols.

The Illinois Department of Public Health reported 288 cases of COVID-19 as of Wednesday, though the number is likely higher due to scarcity of testing. IDPH reports one person has died from the disease, a Chicago woman in her 60s who had underlying health conditions.