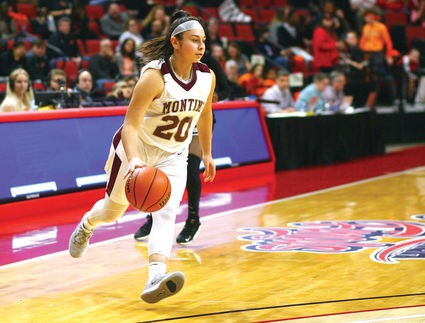 Making its 14th trip to the IHSA state girls basketball finals is nothing new to Montini Catholic.

The Lombard-based school made its 14th consecutive trip to the finals this season, placing third in Class 3A with a 55-43 win over Springfield Lamphier.

What is rare for the Broncos this season is the age of the players they accomplished the feat with.

Among the trio of ninth graders are Madisyn Saracco and Alexa Salazar – a pair of Plainfield residents.

Saracco, who lives in Plainfield South's boundaries, averaged 5.3 points per game, while Salazar, who would have played at Plainfield North, averaged 2.5 points.

Both players saw court time and each scored in the state tournament.

"Maddie is a kid that is up and down once she realizes more what we are doing, she will be even more effective," said Montini coach Jason Nichols. "She has talent and skill, but sometime we are driving a car with three tires. Lexi is a big-time shooter with unbelievable passing ability and once she learns the pace and how quick you have to play at, yet still be under control and disciplined, she will be effective.

"We had Michala Johnson that went to UCONN, Whitney Holloway that went to Notre Dame and Caprice Smith, who is on my staff, that went to DePaul – all three of them impacted the game immensely as freshmen. Well, we have 30 something other Division-I players, does that mean they stunk as freshmen? No, they were developing and that takes time."

The Plainfield tandem understands what they gave up playing at Montini, forfeiting playing time and a chance at putting up big numbers at a young age.

"It is worth the drive," Saracco said. "It is awesome. I love my teammates and I love my coach and I am very grateful for them. They push me to be my best. During my eighth grade AAU season, I started to grow and just get my game better and Montini is a big name and coach Nichols is a great coach and I love playing for him – it is not just basketball, he is teaching us life lessons."

Nichols is an intense coach, and to a fan in the bleachers could come across as yelling at his player. They know the method to the madness.

"He is not yelling at you, he is trying to push you to be your best," Saracco said. "Yeah, he will get on your butt, but his whole mindset is to make you the best player that you can be. I learn so much and I have gained so much experience. You are not ever guaranteed to be here and I am grateful we are here and I am grateful for him pushing me to be my best.

"I am used to being pushed, my dad pushes me and I have two older brothers, so I am always being pushed – I am a tough girl."

"It is an amazing experience. I am learning from a super smart coach and very smart players," she said. "When you go against players that are going to be Division-I players in practice every day, you are going to learn a lot – that helps you get better more than anything else does. I really wanted to get better every day – that is really the goal of an athlete – and I felt that Montini was the place I could go where I could get better every day. "I feel like I am getting better every day and for me, that is all worth it. I have learned there is so much more to the game that just playing. We scheme, we watch film and that is expected of us on our own. I go home, do homework, eat dinner, shower and watch film. It is like having another class, but it is the class you love the most, so it is OK."

While all of the Broncos understand that a trip to state is never guaranteed and they may never make it back, however, with the youth on the team, the odds are in Montini's favor for a return trip, or three, before Saracco and Salazar graduate.