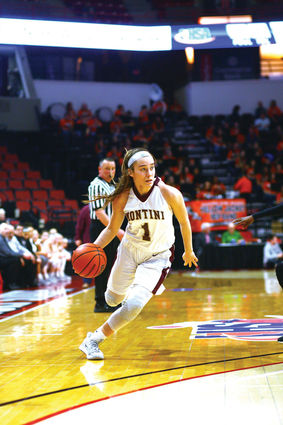 Every season, counting the third-place and championship games in all four classes, there are only eight teams in the state that end the season with a win.

For 10 of the last 13 years, Montini Catholic has been one of them.

The Broncos added to that run with a 55-43 win over Springfield Lamphier in the Class 3A third-place game.

"We have been down her 10 out of the last 13 years and nine times we have either won it or finished third, the only time we lost was in 2018," said Montini coach Jason Nichols. "Even though we haven't always won it every year, nine out of 10 times we have walked away from here with a 'W' on the last day and that is pretty cool stuff."

To earn the final trophy, Montini was led by 15 points from sophomore Sophie Sullivan and 12 from Taris Thornton.

In the semifinal, the Broncos were defeated 48-40 by eventual Class 3A state champion Simeon. To earn the title, Simeon overcame a 16-0 deficit to knock off previously undefeated Morton.

In the semifinal, Sullivan was the lone Bronco to reach double figure with 12 points.

The story of the game came on the glass, where Simeon held a 34-30 advantage overall, but outrebounded Montini 20-11 on the offensive end.

"I knew if we lost this game, it would be because we got crushed on the boards, well, we gave up 20 offensive rebounds and that is not good enough," Nichols said. "Their best offense might be shoot, miss and go get the rebound."

Simeon all-state junior Aneesah Morrow scored 22 points and grabbed 13 rebounds against the Broncos – below her averaged on the season of 26.7 points and 12.3 rebounds per game.

"She is awesome," Nichols said. "This kid may impact the game more than anyone in the state of Illinois. We were in a 2-3 zone, so they went into a 1-3-1 set and she is on the wing. Think about that, a win player that has 22 and 13 at 6-foot-1. When you get her in the open floor, she is a locomotive. She could arguably be the best player in Illinois and Angela (Dugalic of Maine West) is great and Baby D (Lake Park's Darrione Rogers) her stats (26 points, 10 rebounds per game) and performance speak for themselves, but Morrow physically, she looks like a sophomore in college and she plays at a pace that not a lot of kids play at. All week I was watching film on her and I kept turning it off because I was getting sick to my stomach knowing we had to play her."

Prochaska was also on the team two years ago when the team placed second.

"She is a great kid, she is very coachable, never complained about anything and is just a wonderful character kid and she gets to go to Southern Illinois," Nichols said.

Of all the returners, the top three scorers for Montini, Sullivan (8.2 points per game), sophomore Taylor Charles (9.5) and junior Tatiana Thomas (9.0) return to lead the pack.

"We basically return everybody, so as a lot of people start graduating people, we don't," Nichols said. "So, the natural attrition is improvement. It would be nice to see some physical improvement and some skill set improvement and if we do that, good things can happen.

"We talked privately and I gave them an example of a team back in the day, that I won't name, that was in the same position as us and they never won it because a team called Montini did. (This team) can either be the team that gets older and embraces what we are trying to emphasize in practice that will help us win games, or they can be the team like the one that we didn't allow to get back here. Nothing is guaranteed."