JCA's Emma Jay competes for Queen of the Hill 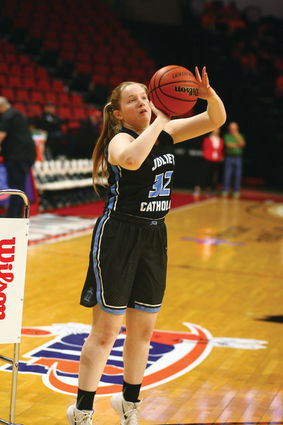 The Joliet Catholic Academy girls basketball team was just two games away from advancing to the IHSA state finals two weeks ago.

Despite a 40-36 loss to Seneca in the championship game of the Wilmington Sectional, the Angels were still represented at Redbird arena – twice.

Junior Emma Jay won the Class 2A Three-Point Shootout state title, connecting on nine of 15 shots on Feb. 28. That came a day after she connected on 10 shots in the preliminary round to advance to the final four. Jay was joined in the prelims by fellow junior Jenna Hernandez.

"This is fantastic. In class 2A, Emma was first out of 776 shooters, which is unbelievable," said JCA coach Jim O'Brien. "Give her a lot of credit. She started training for this in late January with Mark Clark, who ran our three-point stuff. From that point until now, she probably put 2,000 shots up.

"This is fantastic for the school and to get to come down and shoot in front of all these people in this atmosphere, I am so happy for her."

Her win in Class 2A projected Jay to the 2019-20 Queen of the Hill competition where Jay competed against the winners from the other three classes.

In the finals, Jay connected on seven shots, tying her with Class 3 champion Dionna Brooks of De La Salle, while Class 1A champion Kyndel Arthalony of Illini Central hit eight and the Queen of the Hill title went to Fremd senior Ella Burns with 10.

Burns set a new record to win the Class 4A final with 13.

"I was following the scores last night and when I saw 13, I was like, 'oh wow,'" Jay said. "This was so exciting. Especially getting to continue our season and do something that JCA has not had before and I owe it all to the coaching staff and the team for supporting me."

The success of the season, Jay said, helped take pressure off of her in the competition.

"It took the focus off getting nervous for the shoot off and the focus weas on the game and preparing and doing our best," she said. "(When I won Class 2A) it was a good shooting day. I come in with the mindset to just do my best and whatever happens, happens.

While Jay's performance was the end of the 2019-20 season for JCA, it was also the beginning of next season as Jay is one of the seniors coming back to lead a talented Angels group.

"We have almost everybody back and we are only losing a few seniors. It is so exciting, the freshmen group coming in is really good. We are super excited and I don't want it to end," O'Brien said. "Our goal now is to get down here. We were two games away with a very winnable sectional game."