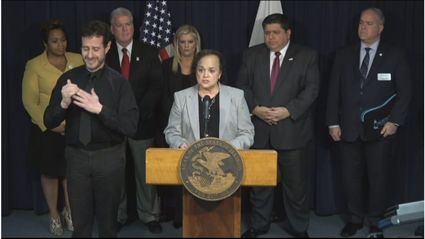 The move is the latest in a string of social distancing efforts aimed at slowing the spread of the novel coronavirus disease, COVID-19, by limiting contact among large groups of people. Yesterday, the governor mandated the cancellation of events with more than 1,000 people and strongly encouraged organizers of events with more than 250 people to cancel them.

The decision represents a change of position from Thursday, when Pritzker said schools would remain open at the discretion of local districts. Pritzker said state officials weigh the evidence daily, and he decided the risk of a student transmitting the virus to more vulnerable populations - such as elderly persons and people with compromised immune systems - necessitated school closures.

"I know a lot of people are wondering why schools, when we know that children seem to be less susceptible to COVID-19 than other populations," Pritzker said at a daily news conference in Chicago regarding the spread of the virus. "But this is a critical part of our larger social distancing efforts. In addition to kids with immunocompromised conditions, we have teachers and administrators, parents, and the larger population to consider.

"I'm speaking in a very literal sense when I say that having the general public stay home one day at a time will have a massive effect on bending this curve. And that means lives saved," he added, while acknowledging the "gravity" of the decision for the state's 2 million students.

The announcement came as public health officials also announced 14 new cases of COVID-19 in Illinois - all but one of them in Cook County - bringing the state's total number of positive cases to 46. The new diagnoses are in people between age 20 and 90, and represent a near-quadrupling of the known cases in the state since Monday.

Nationally, there have been 1,629 positive tests for the virus, which have resulted in 41 deaths as of Friday, according to the U.S. Centers for Disease Control and Prevention.

No deaths have been recorded from the virus in Illinois, where 82 remain "persons under investigation" for the virus and 316 have tested negative.

In the Rose Garden in the White House Friday, President Donald Trump declared a national emergency in reaction to the spread of the virus, freeing up billions of dollars to buoy state and local government responses to the global pandemic.

But Pritzker decried the lack of available testing equipment, and said Friday "we have long since passed the moment when we thought we could count on the federal government to lead in the face of this unprecedented situation."

Officials said the decision to close schools was a proactive and precautionary one.

"By taking these actions now, we really hope to slow and limit widespread transmission, which is essential to ensuring our health care system is not overwhelmed as the disease progresses through our state," Illinois Department of Health Director Dr. Ngozi Ezike said at the news briefing.

Pritzker said he is working with the Illinois State Board of Education to ensure critical support functions such as "access to food, child care and safe environments" remain available to students across the state.

The governor's office said ISBE was granted a waiver from the U.S. Department of Agriculture to provide meals to students in non-group settings. Students on free and reduced lunch and breakfast plans will have access to to-go meals each day, with some districts able to deliver and others offering parent pick-up options.

"This is an unprecedented event in our lifetime," said Dr. Carmen Ayala, Illinois Superintendent of Education, noting ISBE has asked districts to provide "continuity of education" for students.

She said ISBE asked that at least one administrator stay on-site at each school during regular school hours, "in case children whose parents cannot be home, or children experiencing homelessness need a safe place to go."

"This is a scary time, but please know that we are here to do anything and everything we can to help our schools and our students get through this crisis," she said.

School districts will not be subject to penalties because of the closure, and it will not affect school funding, according to the governor's office.

Officials also advised against panic and hoarding of resources, but continued to impress the importance of washing hands, cleaning frequently touched surfaces and staying home when ill. The virus is most widely spread by droplets of saliva and mucus, according to officials.

"We are trying to reserve our resources ... our protective gear - gloves and masks - save those for the health care workers who are on the frontlines, who are at the greatest risk of infection and who need to continue working through this situation," Ezike said.

The positive test results are centered in northern Illinois, and about 30 percent of them are from community spread, according to IDPH, which means spread without contact with a known carrier or without visiting a known affected area.

Pritzker said because of this, the whole state must be prepared.

"Once you have community spread, it has the ability to go anywhere. So I know there are people that live in central Illinois right now who feel like, 'Well, gee, nothing's hit my town or my county.' Unfortunately, everybody is susceptible. And so we should all be on the same page here," he said.

"This is coming. It's here," Pritzker added. "We're going to have to live with it for a while. There is no vaccine yet. There is not even direct treatment that has been developed. And we don't even have enough tests yet, so let's get ahead of this thing. Let's do the right thing." 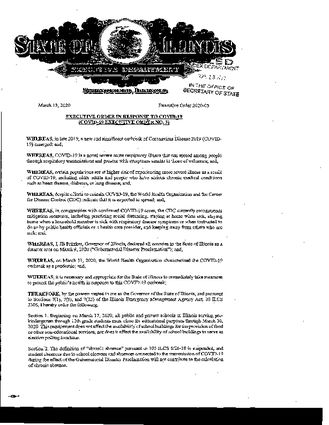 The Illinois Commerce Commission also urged regulated utility companies across the state - including energy, telecommunications and water - to stop shutoffs in cases where customers are unable to pay, according to a news release. Utilities were also urged not to implement late penalties.

The governor is also contacting the leaders of Illinois' utility companies and urging them to maintain services for all Illinoisans, regardless of their ability to pay, during this public health crisis, according to a news release.