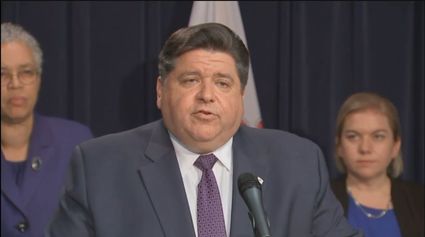 Gov. JB Pritzker speaks during a news conference Thursday in Chicago to provide an update on coronavirus cases in Illinois and the preventative steps being taken to limit the virus' spread.

Gov. JB Pritzker banned events with more than 1,000 attendees for the next 30 days and urged businesses to allow employees to work from home as the number of confirmed COVID-19 cases in the state reached 32.

At a daily news media briefing on the spread of the novel coronavirus Thursday, the governor noted authorities would "break up" any large gatherings exceeding that number. He also said the ban applies to large religious congregations, and noted he asked all professional sports owners in the state to put off sporting events until May 1.

"The virus is here in Illinois. While it may not be in your community now, we anticipate it will be eventually. We all need to take action now by postponing large events and restricting visits to nursing homes to limit the spread," Ezike said.

"Guidance for this novel virus is changing day by day, sometimes hour by hour, but we want to empower people to think about what they can do to reduce their risk of possible infection, as well as spread of the virus," she continued. "The state will continue with containment efforts while also implementing mitigation strategies and we're asking for your help in these efforts."

About a quarter of those cases are believed to be from "community spread," which means the infected persons have neither a travel history to an affected area nor a connection with other known cases. There have been no known deaths from the virus in Illinois.

The new guidelines are necessary as the number of confirmed cases has tripled since Monday, said Dr. Allison Arwady, commissioner of the Chicago Department of Public Health. That rate of growth necessitates preventative action to slow the spread, she said, because increased reach of the virus means greater likelihood it impacts vulnerable populations, such as the elderly and those with existing medical conditions.

"Now is the time for people to be taking these recommendations seriously," Arwady said. "We don't want to wait until when we have hundreds of cases or thousands of cases."

She said while about 80 percent of people who have contracted COVID-19 around the world experienced "a relatively mild course," the added precautions are aimed at protecting the other 20 percent who experience a more serious illness.

About 5 percent of cases end up in intensive care, Arwady said, while deaths rates are in the "1 to 2 percent range."

Public health officials reiterated the necessity for people to wash their hands thoroughly and stay home when feeling ill, as the virus is mainly spread through droplets of saliva from coughs, sneezes and touching one's mouth and face.

As of now, the state will not order the closure of public schools, although it does discourage schools from hosting large assemblies. Local districts should reassess as things progress, according to guidance.

Arwady said although one of seven new confirmed cases of COVID-19 was in a child, that person did not require hospitalization. Health experts are more concerned about nursing homes and places that house older adults, she said, because the virus appears more dangerous to those populations.

The state is also encouraging organizers to cancel or postpone community events of 250 people or more until May 1, including personal and social events.

For events less than 250 people, "residents should closely consider who is likely to attend the event and, if it includes vulnerable populations, strongly consider canceling," according to a news release from the governor's office.

Pritzker also announced the James R. Thompson Center, where state business is conducted in Chicago, will be closed to anyone who does not have business in the building "for the foreseeable future."

Otherwise, the governor's office is "working closely with all state agencies to ensure essential services will continue to be provided, while taking steps to protect the health and safety of state workers." 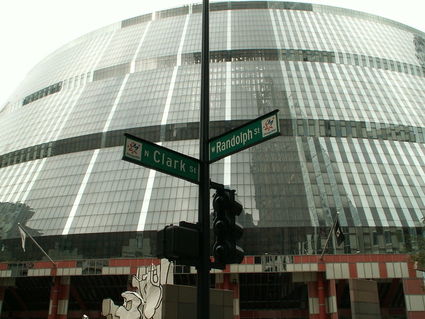 For those who cannot, employers are encouraged to "take proper precautions to keep individuals safe in the workplace." These include reminding staff to stay home when sick, remaining flexible on leave policies, and promoting "robust mitigation approaches, such as hand washing, cleaning, and offering hand sanitizer," the governor's office said in a news release.

The March 17 elections will go on as planned, Pritzker said, and he encouraged local jurisdictions to expand hours for early voting over the weekend.

The Illinois Department of Public Health operates a COVID-19 hotline at 1-800-889-3931 for those with questions about the virus, or they can email [email protected]