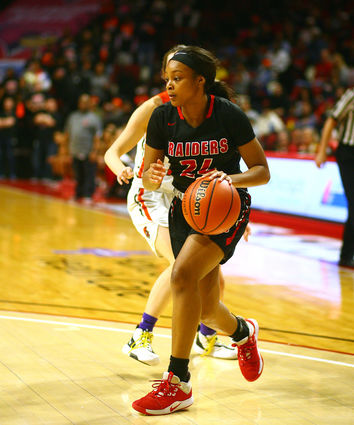 For the first time since 2011, the Bolingbrook girls basketball program will bring home a state trophy, unfortunately it will not be the one the Raiders wanted.

With a 68-57 loss to Lincoln-Way West in the IHSA Class 4A semifinal at Redbird Arena on the campus of Illinois State University, Bolingbrook will play Lake Park at 5:30 p.m. Saturday for third place in the state.

Bolingbrook was plagued all game by missed shots – both at the rim and at the foul line.

"We were 20-64 from the field and they were 20-52, so we took 12 more shots, but had the same number of made shots," said Bolingbrook coach Chris Smith. "We were 50 percent at the free throw line and we have talked about it all year that we have to convert free throws. If we don't become a better than 50 percent free throw shooting team, we won't beat quality teams and it came back and bit us today."

The Raiders were paced by 18 points from Northern Illinois University recruit Jayden Marable and 13 from sophomore Kennedi Perkins.

Marquette University-bound Danyel Middleton had 10 points, all in the second half, while LSU commit Treasure Thompson had nine points and 12 rebounds.

"My story hasn't changed all year – our biggest Achille's heel as a team has been layups and free throws and when we convert that, we are a difficult team to beat," Smith said. "When we don't, quality teams like Lincoln-West will beat us."

The Warriors were led by the Gugliuzza sisters – Taylor with 26 points, Tara with 14 and Ava with 12.

"When you give them open opportunities, they will convert and that is what happened," Smith said.

As the shots failed to fall for the Raiders, the mental part of the game played a huge part.

"Mentally it is a grind. There is nothing that can prepare you. The lights shine a little bit brighter than on a high school floor," Smith said. "Mental toughness and maturity plays a part in being able to handle it, absorb it and still stay focused on the task at hand.

That mental toughness will be on display in the third-place game when they come back and look to defeat the Lancers to go out with a win.

"It all starts with senior leadership. The seniors have to look and say, this is our last time playing in this uniform and everyone wants to go out a winner," Smith said. "The underclassmen have to look at the fact that getting back here starts tomorrow.

"There are only eight teams end the season with a win and we want to be one of those eight teams."