By Bob Narang
For the Enterprise 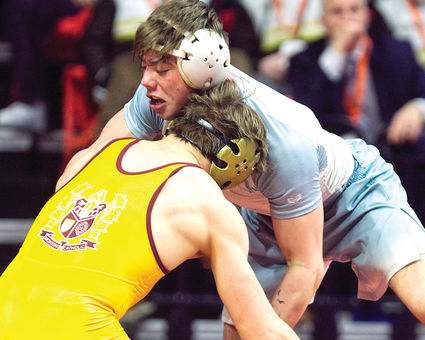 Pierandozzi's highlight-filled career was missing one key element that alluded him - a state title.

Throughout his first three matches in the Class 3A 152-pound class at the State Farm Center, Pierandozzi stayed on the track toward his goal of attaining his first individual state championship.

"I felt I wrestled well even with a sprained ankle in my first three (matches), and was pretty confident," Pierandozzi said.

Montini senior Joe Roberts, in a defensive battle, pulled out a 5-2 win in the 152 final on Saturday night.

The Broncos, in total, won all five of their championship matches to set a new program record for excellence.

A four-time state qualifier, Pierandozzi kept his words short due to still feeling the sting of losing in the title match to the North Carolina State-bound Roberts.

"I just tried to wrestle hard since it was my last match in high school and not look back," he said.

Pierandozzi (32-4) said he's searching for the right fit to continue his career in college, but he ends his career by equaling the highest finish in program history.

Villar also lost to Stiles in the first round, but fought back in the wrestlebacks to win his next four matches to set up a rematch.

Villar, a senior, easily topped his previous trip to state last season when he failed to place at 120 pounds.

"It felt good, but the first (match) kind of caught me off-guard because I was little nervous," Villar said. "After that, I just wrestled how I do in the practice room and everything turned out good. Last year I was tense and scared. I learned not to be nervous. Every match in the consolations could've been my last match, so I just gave it my all.

"I avenged three losses and beat (Milos) after he beat me 7-1 earlier this year. I'm still trying to wrestle in college. It's looking pretty good. Hopefully, this tournament helps."

But Gumila was all smiles after a strong tourney that included four wins in six matches. Last season, Gumila lost both of his state matches.

"Last year my goal was just to make it down here," Gumila said. "I didn't realize the opportunity I had, so this year the goal was to place at state. I did it. I'm very happy. I just wanted to place. Next two years I will work toward the top. It feels great to place.

Jacob Macatangay (47-7) snared a sixth-place medal at 113 pounds to give Plainfield North two medalists in the same season for the first time in program history.

Minnito (40-7) finished 3-3 at state, losing his final two matches, including 7-3 to Huntley's Sam Spencer in the fifth-place bout.

Minnito, a state qualifier in his sophomore season, missed last season with a dislocated elbow that sidelined him nearly eight months.

"This feels great, but I would've liked to have done better but I still made it down here," Minnito said. "I just worked hard because I missed a lot of time because I was hurt. I put in a lot of work in the offseason. It was special being able to get down here."