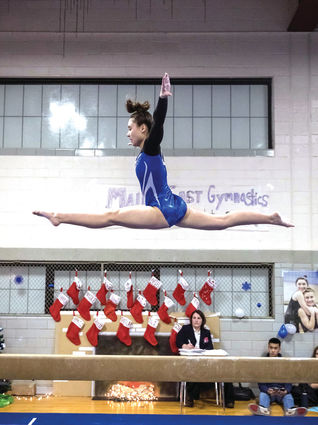 Before the arrival of Afroditi Baltsas, the Maine East girls gymnastics program was an afterthought, one of the lowest rated teams in the state.

Four years later, that is no longer true.

Baltsas capped an impressive high school career on Friday at the state meet at Palatine.

That performance ended a prep career in which Baltsas transformed the Demons into a serious program and the school gave Baltsas countless warm memories.

“(Representing Maine East) means everything,” Baltsas said. “These past four years have been the highlight of my gymnastics career by far.

“My team has gotten me to where I’ve been and definitely my coach (Neil Adamson) has made the biggest impact on me. I loved everything that I did the past four years.”

Baltsas wasn’t sure what she was getting into when she joined the Demons as a freshman. That was understandable considering the team averaged less than 100 points the year before (the top teams in the state eclipse 140).

“When I first came to Maine East I kind of thought of it as not that great of an athletic school,” Baltsas said. “I was on the fence about doing gymnastics, but I think the reason that I have competed the past four years is all because of Maine East gymnastics.”

That is music to the ears of Adamson, a Maine East graduate who has coached the boys gymnastics team for the past 10 years and the girls for six. He is resigning so he can focus on his full-time gig working in the movie industry.

“(Baltsas’ accomplishments) have definitely gotten more awareness of the sport and of the team in this school and in the grade schools and junior high, which has been really good,” Adamson said. “I think the effects of that are going to be seen more down the road then right away, but even (now), a lot of the freshmen and sophomores that are on the team, they don’t know a team that’s without her.”

While an elite gymnast like Baltsas cannot be replaced, Maine East will return the rest of its regional lineup, which includes junior all-arounders Caitlin Urban and Yulia Shiskevic as well as four event specialists in junior Cydaney Whyte, sophomores Ariel Aguilera and Gabriela Petrova and freshman Megan Espinoza.

“Their perspective on our team is so much drastically different than the girls on the teams of the past,” Adamson said. “Because when I started coaching for the girls program, the mentality was very much, ‘Well, we lose, so we’ll just have fun.’

“Now the mentality is ‘We can compete.’ Sometimes it’s a long shot, but a lot of times we can edge past some opponents.

“This season most of the teams that we lost to, the scores were super close. We can fight.

“So having (Baltsas) gave some legitimacy when we started and then I’ve been fortunate as a coach to be able to have a bunch of other girls that have also come in with experience.”

As for Baltsas, her final meet was a mixed experience. She came into state ranked third on beam, which is her best event, though not her favorite.

Always rock-steady on an apparatus that foils even the best gymnasts some of the time, Baltsas fell off on Friday and finished 18th with an 8.75. Had she not fallen, Baltsas would have advanced to Saturday’s event finals. The top 10 individuals in Friday’s prelims make the finals, where the top five earn medals.

“It was a hard day,” Baltsas said. “I was really looking forward to beam.

“I felt like all the outside pressure kind of got to me and I was really thinking about staying confident and comfortable. But it’s been a good season so I’m happy with how everything went.”

Adamson was happiest with Baltsas’ showing on uneven bars, where her 9.225 would have tied her for 13th place had she qualified individually on that event. Baltsas, who had never advanced past regionals on bars until this year, barely missed the cut at sectionals on that event. 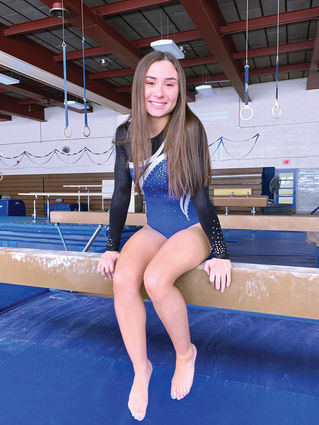 “The bars is the one that she’s always wanted but it’s always been just out of reach, even though she enjoyed it,” Adamson said. “Even though she’s the best on beam, she has more fun on bars. At least she had a chance this year.”

So now Baltsas, an aspiring pharmacist who has been on the high honor roll throughout her high school tenure, will put the sport she has enjoyed since first grade in her rearview mirror with no regrets.

“I was just an energetic kid,” Baltsas said. “My parents decided to put me in some classes and it just went from there.

“I love gymnastics. It’s definitely taught me to trust myself and to be confident. That’s been a big thing.”