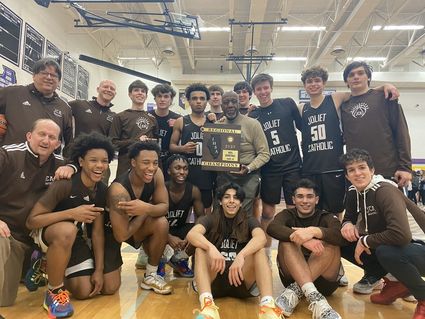 This season, the Hilltoppers entered the Class 2A tournament with an 11-19 record and was the No. 7 seed one of two sub-sections of the Pontiac Sectional.

While the seed may have reflected Joliet Catholic's record, it did not reflect how it got that record.

The Hilltoppers (14-19) play in the East Suburban Catholic Conference, arguably the best basketball conference in the state outside of the Chicago Public League.

Five ESCC teams earned top-four seeds this season in Class 3A – including Notre Dame of Niles, which spent most of the season ranked as the Associated Press top team in Class 3A.

That experience was on point in the entire Manteno Regional as was especially evident in the Hilltoppers' 51-46 overtime win over host Manteno to claim its second regional championship in the last six years.

"The last game of season we played Marian Catholic and it was a three point game and we had the ball with a minute to go. And they won our conference," said JCA coach Joe Gura. "That is how good we have been playing."

"I think defense won it," Gura said. "We missed like 13 layups and five free throws and won the game because the kids play defense all the time. The kids never gave in and played defense every possession. We had some huge stops.

"This is about the kids never giving up and talking on defense. We haven't played good offense in the last two games and we won because we play good defense. I love it."

The Hilltoppers had shooting woes early in the contest, but kept it close and went into the half only down five, 20-15.

Manteno then ignited its home crowd with a burst to open the second quarter and get the lead up to 12 – but JCA pushed back.

The Hillmen were trailing by three with the final minute of the clock winding down when Jake Bumstead hit a three pointer on a feed from Christian Young with 21 seconds on the clock to send the game into overtime.

"I was off early and I was trying to play my game and play great defense and CY believed in me and found me I hit it," Bumstead said. "Just catch and shoot just like all my days in the gym. This team does not quit. We have been through a lot. We were down 20 in the fourth quarter to Wheaton Academy and came back and won. We don't stop fighting and it shows."

Bumstead paced JCA with 11 points and 12 rebounds – eight of the rebounds came in the fourth quarter and overtime.

Bumstead admitted the team had a chip on its shoulder coming into the contest.

"We felt disrespected getting the No. 7 seed. We beat Coal City and Manteno in the regular season," he said. "It was fuel to the fire, we just wanted to show everyone we could beat these teams."

Young added 14 of his 17 points in the second half and overtime after struggling offensively early. He added six defensive steals.

"We had to make sure to keep our confidence through the adversity and keep shooting," Young said. "My shot wasn't falling and I knew I could get to the rack and give us momentum."

Up next for JCA is a date with Paxton-Buckley-Loda at the Pontiac Sectional Wednesday at 7p.m. 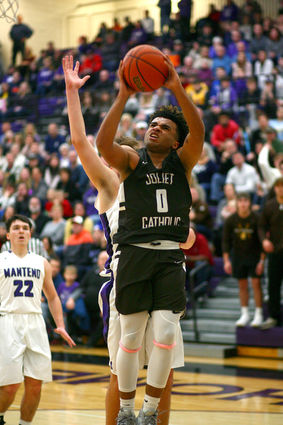 Paxton-Buckley-Loda is the No. 2 seed in the other sub-section, and while it is most likely a talented team, chances are it is still not as good as the teams in the ESCC.

"They better not be," Gura joked.

With the team was eliminated last week, it was also a good day for the Angels.

Emma Jay hit 9 of her 15 three-point shots to win the Class 2A Country Financial Three-Point Showdown at Illinois State University's Redbird Arena. Jay will return to Redbird Arena next Saturday to compete for the Queen of the Hill 3-Point Shootout overall crown against the winners from the other three classes.

Jay's teammate, freshman Jazz Brown, was been named to the Class 2A District 9 All-State Team and was named to the overall Class 2A Honorable Mention Team