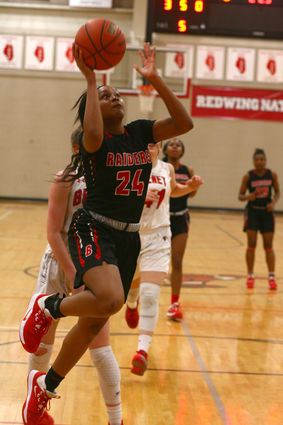 It has been eight years since Bolingbrook girls basketball has advanced to the IHSA state finals and had a chance at winning the program’s fifth state championship.

This year’s Raiders are one game away.

Bolingbrook defeated Benet Academy, the Associated Press No. 1 team in 4A, 68-54 to win the Benet Academy Sectional and advance to the Super-Sectional Monday against Whitney Young.

“This is a big accomplishment. We have talked about it all year, when we come together and play together as a team, we are a tough outfit to beat,” said Bolingbrook coach Chris Smith. “When you think about that Treasure picked up four fouls in the first quarter and we still were able to come in here and perform in a hostile environment. The talent is here. If we play together, we can take this a long way.”

Bolingbrook’s LSU-bound Treasure Thompson picked up her third personal foul just past the 5 minute, 30 second mark of the second quarter and was then hit with a technical foul – her fourth personal.

With her backup Faith Domercant and Marquette commit Danyel Middleton also had three fouls by halftime and the Raiders still went into the break tied 29-29.

With the three in foul trouble, it was NIU recruit Jayden Marable that stepped up and took over the game.

Marable led all scorers with 24 points.

“Jayden made up her mind that she was going to be a difference maker tonight,” Smith said. “Jayden is our senior captain and she is everything. All the pressure was on (Benet) tonight. They were the No. 1 team in the state and on their home floor. She took over. She put this team on her back tonight and she took us.”

“Beating the No. 1 team in the state is huge for us and this is big for us,” Marable said. “I knew I had to be a leader tonight on and off the court and encourage my teammates and get them looks on the floor. We haven’t had a quality win like this all season. We have struggled playing together all season and this is the best time to do it.”

Bolingbrook will now return to its back yard and take on Whitney Young at 7 p.m. at the Lewis University Super-Sectional.

The two programs are no stranger to each other.

During Bolingbrook’s three consecutive state championships from 2008-09 to 2010-2011, the Raiders defeated Young two times in the state finals and once in the Super-Sectional.

In 2007-08 Young defeated Bolingbrook in the state championship game, while it was a win over the Dolphins in 2005-06 that began the Raiders’ run of four state titles in six years.

“Whitney Young kind of stayed under the radar this year and look where they are, one game from state,” Smith said, “We know Young and the tradition and history, so this is not surprising. We look forward to the match up and the best team will go.”

Ironically, a win over Young Monday could set up a Class 4A semifinal against Homewood-Flossmoor, who will play Lincoln-Way West in the Illinois Wesleyan Super-Sectional.

H-F is coached by Tony Smith, who was at the helm during the state championship runs. Bolingbrook lost twice in conference play to the Vikings this season, falling 47-43 on Jan. 23 and 51-48 on Feb. 11.