Maverick's owners just happy he is alive after scary incident 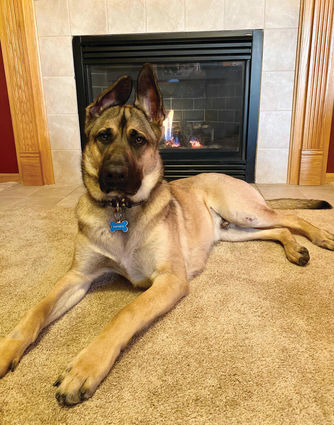 Recently, a 10-month-old puppy by the name of Maverick had the fight of his life.

The German Shepherd had to be rescued by the Plainfield Fire Protection District after he wondered to a pond and fell through ice.

Ironically, a call was made to the owners of Maverick, saying that his brother was hit by a car the day before Maverick had to be rescued.

"He's never gotten out of our house, ever," said owner Kaila Skrzypiec. "I was heartbroken that day, I think I was more hysterical at my dog more than any human."

After Kaila left for work, her husband Matt let Maverick out, which she said he then heard an unusual noise that he's never heard before.

Originally, Matt thought he heard the garbage cans, but then it turned out to be the worst.

Panicking, Matt stepped out of the house and searched in the front and back yard, but Maverick was nowhere near in sight.

With the thought of not shutting the gate, Matt checked to see if it was unlocked or open, but the gate was shut.

"My husband ran through the house to the front and as he started running down the street, some guy in a truck pulled over and asked Matt if he was looking for a dog," Kaila said. "

After the driver explained which way Maverick took off, Matt immediately sprinted in the direction and begun his search.

While looking, Maverick shot out of a corner that Matt caught with his eye, and he begun to squish Maverick's favorite toy ball in hopes he would return safely in his arms.

"He's a dog that we can tell him to come by us and he always listens," Kaila said. "He's very disciplined."

Maverick didn't respond to his owners' command and took off again through an open field that was surrounded by several power lines.

"At that point by husband just lost sight of him," Kaila said. "I'm not sure how he even crossed the busy street, he must have been running through a bunch of different neighborhoods."

Kaila said immediately after she received the call just after 7 p.m., she left work and began a search party that included her family and friends.

"After a while, I got another call from the Plainfield Fire Protection District that they found him in the middle of a ice pond," Kaila said.

Matt and Kaila's sister went to the site where Maverick was located, which was near Drauden Road and Catherine Drive in the Fond Du Lac subdivision.

A next door neighbor to the pond heard Maverick barking and realized where he was and went in his garage to get a kayak to help rescue the puppy.

"Our guys dressed up in cold water suits that helped rescue Maverick," said Chief Jon Stratton. "Once they got on the scene they were in the water less than two minutes."

For the rescue, the team asked the neighbor in the kayak to back away from the dog because they didn't want Maverick to flip him over in the kayak because he is a bigger dog, so they hooked a line up to the rescuers and they went out where a sling is available if they need it but they then grabbed Maverick and secured him, and finally the people at the shore then pulled them back in safely. 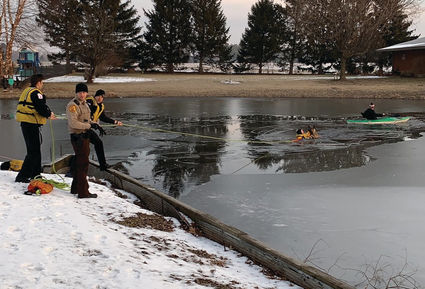 The recovery process for Maverick has been good so far, but he does have lacerations on his left leg and paw and on the majority of his body, and he also suffered hypothermia following the event, but Kaila said she is very thankful that he is all right, understanding it could have been an a lot worse outcome.

"They had heating pads and warm blankets on him, and they were just trying to warm him up any way that they could," Kaila said. "They also said he was just shaking uncontrollably.

"When we got to the vet his temperature was at 96 degrees and it was supposed be at 103 degrees. He did have a surgery, but he tolerated it great and he's doing good now, he's playing, wrestling and back to his old self, you wouldn't even know that this happened to him."