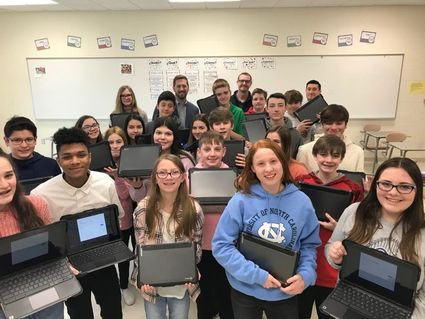 Technology is ever evolving, and there is no better place for that to be on display than in the classroom. Minooka Community High School (MCHS) launched their one-to-one (1:1) Chromebook pilot program the week of February 10th to a select group of freshmen and sophomore classes.

The select group of about 210 students will use their newly received Chromebooks during classes in Chemistry, English II, Health, Animal Science, Special Education, Spanish I, Pre-AP World History & Geography, and Algebra I.

Teachers for this 1:1 pilot program met with administration during the early development stages to ensure Substitution, Augmentation, Modification & Redefinition (SAMR) and International Society for Technology in Education (ISTE) standards were met throughout the allotted time for the pilot program.

In 2014, MCHS converted their email system to Google Apps for Education (Google Suite). This improved their email system while also providing staff and students the ability to share documents within Google Drive such as: Calendar, Classroom, Docs, Sheets, Slides, and other collaborative services to enhance the classroom. Google Classroom has evolved over time and provides powerful tools for teachers to assign and grade paperless homework, collaborate with students, and share information about their classes on any type of device that has internet access to the Google Suite.

In 2016, MCHS began introducing Chromebook carts to be checked out by teachers at each campus and improve access to technology. Every year MCHS introduced more carts but found that the need for technology improved just as quickly. With over 1350 devices throughout the district, teachers embraced the technology and integrated it into their curriculum and day-to-day classroom activities. With teachers sharing the carts, it made it difficult for teachers that relied on technology, to provide a lesson without access to devices multiple days in a row.

In 2017, discussions began regarding the steps needed to move MCHS to a 1:1 student to device ratio.

"We understood that before this could be done effectively, the wireless infrastructure at each campus would need to be renovated to support the influx of the added devices," stated Jim Kelly, Director of Technology at MCHS. "As of now, both campuses have been updated and bandwidth has been increased to support a 1:1 program." Continued Mr. Kelly.

"MCHS affords an amazing learning environment for our students and teachers, so why not provide them with the latest technology to enhance their knowledge and culture," stated Bryan Zwemke, Building Principal at MCHS. "Monitoring of the project will be constant through the teachers and their reports of how the devices and lessons are working cohesively. This proposed pilot program is one of many steps to a much larger proposal for a 1:1 plan for the Freshmen and Sophomore classes of the 2020-21 school year and each incoming Freshmen class, thereafter, until each MCHS student has a Chromebook device." Continued Principal Zwemke.

The pilot program will move through 4 phases consisting of purchasing and configuring the Chromebook devices; introducing the devices to the teachers and delivering them to the students; collecting data from teachers and students on the effectiveness of the program; and transitioning MCHS to 1:1 with the freshmen and sophomore classes. The pilot program will run through the middle of April.