Romeoville girls suffered through a tough season this year, but signs point up next year 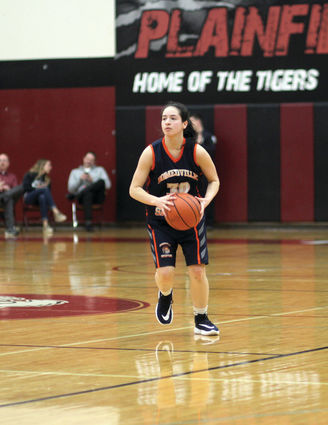 Romeoville's season ended with a 50-43 back-and-forth loss to Plainfield East in the opening round of the Class 4A Plainfield North Regional.

The Spartans (8-21, 3-13) went into halftime with a one-point deficit, but couldn't muster up enough offense in the final minutes of play to come out on top.

"The last few minutes of the game were tough because we started to get out of our offense," said coach Julio Carrasco. "Defensively I thought we do a good job and fought, but I think it came down to getting out of our offense a little bit and not scoring too many points in a critical point of the game."

During the 2019-20 up and down season for the Spartans, they never put back-to-back wins together, and Carrasco alluded to the youth of the team for the inconsistent season.

"I think next year the team will be really ready to play," Carrasco said. "We are losing three seniors this year who are all good players, but our three main core players are coming back next year."

The three seniors who will graduate will be guard Alydia Hilliard, guard Naomi Harris and guard Karina Ortiz.

The Spartans are bringing back their leading scorer, junior guard Lindsay Novak who led the team with an average of 15 points per game this season.

"She's pretty much going to be a leader for us even more next season," Carrasco said. "Novak has been unbelievable for us offensively, but she has also turned into a pretty good defender for our ball club."

Besides Novak, the Spartans will also look towards junior forward Josey Ocampo who will be the second option on offense next season.

"Josey has turned into a great spot up shooter," Carrasco said. "We will be looking for her to do the same next year, and continue to be that weapon for us on offense."

The last member of the trio returning is junior guard Savannah Anderson.

"Savannah is the glue for it all next year," Carrasco said. "When I look back at the season, there were a lot of positives but we just couldn't finish a lot of the times, these three girls will help us tremendously next season to do that."

Although the Spartans season came to an end, Novak agreed with Carrasco saying that the identity of the Spartans next year will be a smart basketball team.

"We need to have that basketball IQ, look for open shooters and just play more as a team," Novak said. "We beat teams this year that people never thought that we could beat.

"Losing three seniors is a good thing, because it means most of the girls are coming back and we want to go past the first regional game next year and I think we will have the girls to do that."