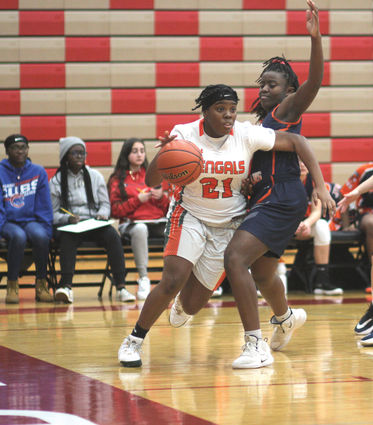 Plainfield East defeated Romeoville in the opener of the IHSA Class 4A playoffs.

A win has been a difficult thing for the Plainfield East girls basketball team to come by this season.

The Bengals last win came on Jan. 20, with the team losing six straight games after that, making 50-43 win over Romeoville in the opening round of the Class 4A Plainfield North Regional that much sweeter.

"It's been awhile for us since we had a win so this was huge for us especially going forward with our confidence," East coach Anthony Waznonis said.

With the win, Plainfield East moved onto a much more difficult task as they positioned themselves in the semifinal round.

The Bengals (8-23, 3-14) advancement against the Spartans, who they split with during the regular season, puts them up against the No. 1 state ranked Benet Academy Redwings.

"We haven't had a win in a while even though we have been working really hard in practice and staying later than normal," said East senior Tamia Edom. who led all scorers with 18 points. "We know how good Benet is, I know I'm really excited to go against the best of the best, so we just have to keep our focus and not get down on each other out there."

The Redwings, who are a familiar foe of the Bengals, knocked off East just three years ago by a final score of 59-48.

That Sweet 16 experience for the Bengals is something that most players on the team weren't there to experience, but the motive to not let that happen again is on their mind.

"I told the seniors that we did not play well last Tuesday and that's not how we are going to go out," Waznonis said. "A lot of the players were not at Plainfield East when we lost to Benet that year, but from a standpoint of not letting history repeat itself is something that we definitely don't want to let happen."

Overall, Waznonis was pleased with the way the Bengals performed.

"For the most part we kept our focus tonight," said coach. "When you have a week to prepare, you understand the things that are coming your way so it was just about being disciplined."

As a team, the Bengals have all but two players who are upperclassmen, with sophomore Taylor French, and the freshman Jocelyn Trotter set to return next season.