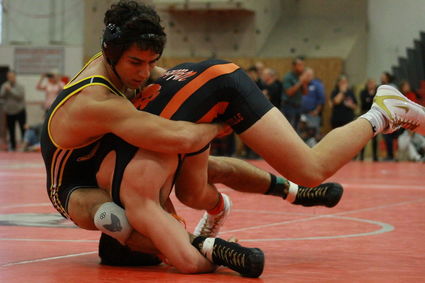 Over the President’s Day Weekend, Joliet West High School wrestler Jeremy Pullen placed third at the IHSA Sectionals at 160 pounds and qualified for the 3A IHSA State Competition. He advances to the IHSA State Wrestling Tournament in Champaign, IL this upcoming weekend, Thursday-Saturday, February 20-22, 2020.

Joliet West Wrestling Coach Chuck Rumpf said, “I am most proud of the perseverance and determination Jeremy has demonstrated in getting this far. He has been close to this accomplishment over the past three years and has now broken through to the state tournament. He has earned the distinction of being one of the best wrestlers in the state in his weight class, and I look forward to seeing him compete for a state championship this weekend! I am thankful for his leadership as a captain and his contributions to the program over the last four years. His achievements will have a lasting impact.”

JTHS wishes Jeremy the best of luck at the state competition.