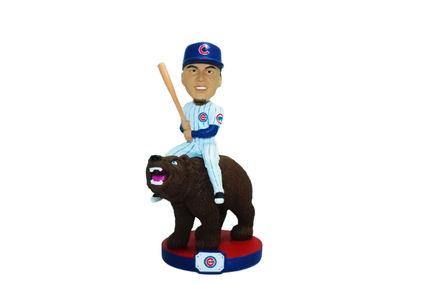 Wearing the Cubs signature home pinstripe uniform, the smiling Baez bobblehead is holding a bat and sitting atop a ferocious looking cub. Each bobblehead is individually numbered to 2,020, and they are only available through the National Bobblehead Hall of Fame and Museum's Online Store. The bobbleheads are in production with expected delivery in May. They are $40 plus a flat-rate shipping charge of $8 per order.

Nicknamed "El Mago" (Spanish for "The Magician"), Baez has developed into one of the game's most exciting young players on both offensive and defense. The ninth overall selection in the 2011 MLB Draft, Baez made his MLB debut with the Cubs in 2014. Two years later, he was named the NLCS co-MVP with pitcher Jon Lester as the Cubs won the 2016 N.L. pennant and went on to win their first World Series in 108 years.

An All-Star in 2018 and 2019, Baez was also a Silver Slugger award winner in 2018 as he led the N.L. with 111 RBI. On the heels of his World Series triumph, Baez helped Puerto Rico capture the silver medal in the 2017 World Baseball Classic. In his last three MLB seasons, Baez has been one of the most productive shortstops in baseball, collecting 102 doubles, 15 triples, 86 home runs, 271 RBI and 42 stolen bases with 265 runs scored.

"We're always thinking of ideas for unique and fun new bobbleheads and the riding bobbleheads have been some of the most popular over the last year," National Bobblehead Hall of Fame and Museum co-founder and CEO Phil Sklar said. "With Javy being one of the brightest young stars in baseball, we're excited to add him to the lineup for Cubs fans to add to their collection."