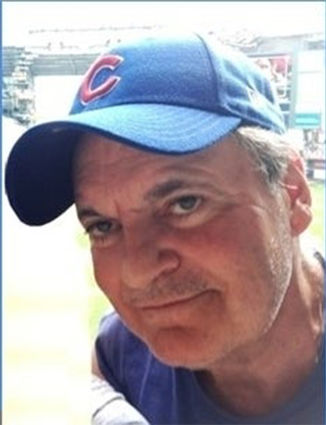 An avid Cubs and Ohio State University fan, Pat was well-known in the Will County community and a friend to all that met him.

He left the newspaper industry just a few years ago to become Director of Membership at the Plainfield Chamber of Commerce.

Visitation will be from 2-7 pm, Sunday, Feb. 23 at Fred C. Dames Funeral Homes, 3200 Black at Essington Roads in Joliet.

A Mass of Christian Burial will be held at 10 am Monday, Feb. 24 at Cathedral of St. Raymond Nonnatus, 604 N. Raynor Avenue in Joliet, while a burial will follow at Resurrection Cemetery, Rt. 53 and W. 135th Street, Romeoville.

Pat was born in Joliet, the son of the late Eugene and Jeanette (Foley) Ryan, he was a lifelong resident. He is a graduate of St. Patrick Grade School, Class of 1972, Joliet Catholic High School, Class of 1976, attended Northern IL University for three years then received his Bachelor's Degree in Journalism from the College of St. Francis in 1980. He was formerly employed by the Joliet Herald News and WJOL/WCCQ as an Ad Executive, the Bugle and Enterprise Newspapers in Plainfield as their Ad Director, and most recently, the Plainfield Chamber of Commerce as Director of Membership.

Pat was a longtime St. Patrick Grade School 8th Grade basketball coach along with his good friend, Pat Paul. He was a lifelong, die-hard Cub fan and season ticket holder for 34 years. One of the happiest moments was the Cubs victory during the 2016 World Series. Pat was an avid Joliet Catholic Sports fan and "The" Ohio State Buckeyes Football. Mike Menozzi (Pat's lifelong friend), with assistance from Pat, developed Jolietcatholicfootball.com. As everyone may know, Pat was dedicated to his daily 3:00 a.m. workout regimen. He thoroughly enjoyed his Sunday afternoon golf foursome with Larry, Larry and Jerry, and the many Joliet Park District Softball and Basketball teams that he was part of.

He is preceded by his parents; siblings, Jim Ryan and Mick Ryan; brother-in-law and sister-in-law, George Daniel and Pam Phillips; and his nephew, Roger "Rogie" Phillips, Jr.