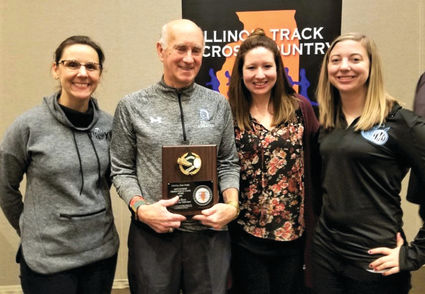 Troy coach John Davis has been named the 2020 Distinguished Middle School Coach of the Year by the Illinois Track and Cross Country Coaches Association.

Davis is head coach of the Troy boys cross country team and co-coach of the track and field team. Over his 28 years coaching at Troy, his teams have won six IESA state championships and finished 23 times in the top four. His athletes have earned 89 All-State medals at IESA State Meets. According to the ITCCCA website, Davis is one of the most successful coaches in Illinois history.

Davis also helps direct the prestigious and largest middle school meet in Illinois, The Troy Invitational, at which 54 schools participated this year.

"Growing up, John Davis was my coach at the Joliet Park district," said Troy Athletic Director Meagan DeGroot. "I coached alongside him when I was a teacher, and now I am able to mentor him as a coach on staff at Troy. John is truly dedicated to the sport of running. He runs in his spare time and often goes to see the high school kids run after they graduate TMS. He has a passion for the sport and for the kids."

"John is perhaps one of the most dedicated coaches I've had the pleasure of working with," Girls Cross-Country Coach Stephanie Oswald said. "He is committed to maintaining one of the most renowned middle school cross-country programs in our state.  Mr. Davis is able to make the sport of running enjoyable for those of all ability levels by incorporating games and humor into our practices.  The kids take such an interest in the activities we are doing that they don't even realize how much they are actually running.  It is so wonderful to see how much confidence our athletes gain throughout their time on the Troy Cross-Country team."

Davis said he was surprised and humbled at the honor.

"No one does this work for the awards," he said, "but it is nice to know that my peers think I am doing something right."

Davis himself ran cross country and track and wrestled when he was in high school. His interest in coaching began when his school-age sons took up running. Former Troy teacher and track coach Mark Clarke, now a Joliet Catholic Academy coach and teacher, took Davis under his wing and offered him a coaching position at Troy. Davis said Clarke "built the Troy Cross Country ship and put it on the path to success."

Coaching is more than just fun for Davis. It's also an opportunity to instill important characteristics in the students.

"At the middle school level," he said, "it is important to make sure youth enjoy what they do. I think it is also important to help them develop discipline, confidence and positive character traits. I try to have a plan for every practice and not lose sight of the fact that we are working with the development of children who you want to be good citizens when they grow up."

Many of his former runners have gone on to compete at the high school and college level and have become coaches themselves.