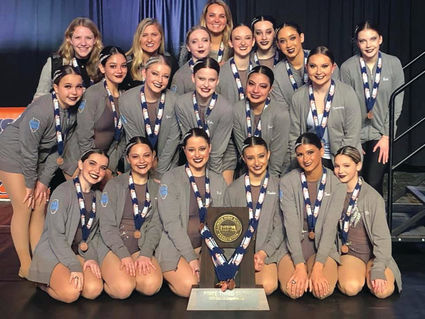 The Joliet Catholic Academy varsity girls dance team received a third-place finish in their quest to repeat as IHSA Class 1A state champions at Grossinger Motors Arena in Bloominton, IL.

The competition began on Jan. 31 in the preliminary round and scores were determined in Saturday's final round on Feb.1.

To honor the Angels, an all-school assembly took place on Feb. 4 to showcase the dancers talent and hard work that came to fruition once again.

As a coaching staff, this was the Angels first year with head coach Kelsey Kempes and assistants Kristina Sak and Carley Serena.

"Our season is a year around sport that really never stops," Sak said. "From football season, to our competitive tryout after football season and then we had about three weeks to get our routine and costume together with this team here."

The girls first competition of the year was at the Wheaton North High School Invitational where the Angels outscored the second-place finisher by 7.92 points.

"That is really hard to do because usually a win is by a single point or less," Sak said. "For the girls to win by that much is extremely impressive."

The 93.78 score was the second highest score among the state's five sectional sites feeding into the state finals.

After sectionals, the Angels took their talents to state which was just a week after, and during the semifinals, the Angels scored a 95.82 that broke the all-time 1A State Championship score.

"That was pretty incredible," Sak said. "Teams were really looking at our team a lot because they thought if they made it to the finals, then they would go against us."

During the finals, the Angels scored a 96.16 out of 100 which solidified their third-place finish.

The first-place team was Centralia High School and the second-place finisher was Morris High School.

"It was a great effort all around," Sak said. "We couldn't be prouder of our girls efforts."

The Angels were led this past season by their three captains and five seniors who were all a part of the first-place state finish last year.

"This year I think we worked a lot harder and improved significantly over last year," said captain Erica Passo. "I think our routine this year was a lot more difficult than last years, but collectively, even though we didn't get first, I think we improved a lot more."

One variable that the Angels didn't have as much of last year was the amount of Freshman added to the roster.

This year, five new freshmen were a part of the team, and one captain said they grew up quickly when the team depended on them at a crucial time. 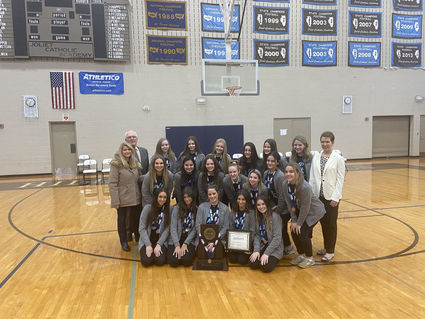 "We got a lot more talent added to this team with the five amazing freshmen that were with us," said Captain Mallory Paolucci. "They added a great quality of technique to this team, and even know understandably they were kind of nervous at the big stage, they really stepped up when our team needed them to and they delivered in a great way."

Sak, to go along with Paolucci, also added that because of the five newcomers this year, the future of JCA dance is looking up as the sky is the limit.

"The five freshmen that came in are supremely talented and they have all learned so much from the upper classmen this year," Sak said. "Even at state, they said that this team danced like a college team including the freshmen which was a huge honor, so even though we will really miss all of our seniors, the future is looking bright for us."