Benet Academy has two players in the school's 1,000-point club on this season's team 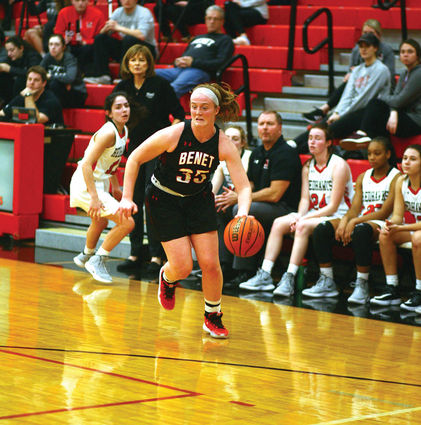 Kendall Holmes, the most recent addition to the Benet Academy 1,000-point club, helped the Redwings get past Evanston in double overtime.

Senior forward Kendall Holmes joined an exclusive company in program history by topping the 1,000-point mark in her illustrious career.

The DePaul recruit scored 26 points to lead the Redwings to a victory over St. Viator on Feb. 5. In the 57-49 East Suburban Catholic Conference win, Holmes became just the 10th player in program history to reach the four-digit mark. Senior forward Brooke Schramek hit the 1,000-point mark earlier this season.

Kilbride noted that the last time he had two players from the same team to surpass 1,000 points in a career led to the Redwings winning a Class 4A state championship in 2014-15.

"The last time that happened was my first year, when Emily Schramek and Emily Eshoo both hit 1,000 points," he said. "That season ended pretty well for us. Hopefully, that's a foreshadowing of things to come. To have two 1,000-point scorers in one year is pretty good."

Emily Schramek ended her career with 1,471 points, while Eshoo finished with 1,383 points in three years on the varsity.

Holmes raised her career total to 1,028 points after tallying a game-high 25 points in Saturday's epic 75-71 double-overtime win over Evanston in the inaugural E-Town Showdown at Welsh-Ryan Arena in Evanston. After a grueling game that Redwings managed to overcome several deficits and two players fouling out, Holmes preferred to talk about her team's victory rather than an individual milestone.

"It's really a team sport," she said. "It doesn't matter about the individual goals, but any day we can get a win and keep looking forward and gaining those wins are a plus."

With the Redwings (27-2) trailing 71-70 and the Wisconsin-bound Schramek on the bench after fouling out, Holmes drilled a 3-pointer to give Benet a 73-71 lead with 21.5 seconds left in double overtime. Molly Sheehan sealed the victory by knocking down two free throws with 8.9 ticks remaining.

Holmes had a gritty effort, enduring a rough injury that caused her to leave the game with 1.5 seconds left in the first overtime. She bounced back to hit two 3-pointers in the second overtime in the physical game. 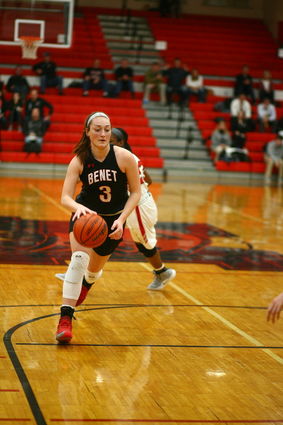 "I did go down and it did hurt, but you have to play through the pain," Holmes said. "I was able to get back in there and make a few more shots. It was probably one of the more physical games that I've played in. The refs were letting us go at it, which I like those type of games. Sometimes it did get a bit too physical, but overall it was fun to play in such a physical game because you don't see too many games so intense like this one."

Schramek, who finished with 15 points, said the Redwings hope to build off the emotional victory. Benet was awarded the No. 1 seed in the 4A Lisle Sectional.

"I have a really good feeling going into the playoffs this year," Schramek said. "Both of my sisters have won state titles, so this is my last chance to win it. I'm really excited. I think we have a really good team this year and we have a good chance if we keep pushing ourselves in practice and play like we did tonight.