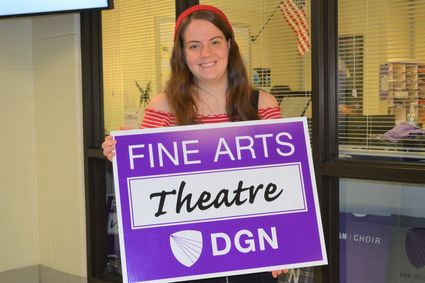 Downers Grove North High School senior Audrey Dwyer earned two regional awards for her original play "PTO No!" She received a Gold Key Award in the Regional Scholastic Art and Writing Awards and her work has been selected to be performed in the 10-Minute Play Festival at Eureka College in April.

"The idea of 'PTO No!' originally began when creating a Mother's Day gift in seventh grade," Dwyer said. "The story is a silly spoof about the power struggles in a school's parent/teacher association. There's something fun for everyone to relate to within the dialogue."

"Audrey's leadership skills as a director and her creativity as a playwright make her a delightful collaborator for our Fine Arts students and staff," Pappageorge said. "We appreciate our Friends of Fine Arts supporters who provided Audrey with the scholarship that led to a summer script writing workshop. They really help our talented students take their skills to the next level."

During her time at North High, Dwyer has taken creative writing, art, and theater classes and she is an active member of the Speech Team. In addition, she has participated in DGN theater productions in a variety of roles including Erin in "Registration Day", the kooky Scottish cook Plodget in "Chemical Imbalance", and the assistant director for the 2019 Spring Musical "Beauty and the Beast." Last summer, Dwyer earned a North High Friends of Fine Arts scholarship to take a scriptwriting class at Columbia College in Downtown Chicago. She looks forward to continuing to study graphic design or screenwriting in college in the fall.

"PTO No!" was originally performed and directed by Dwyer during North High's One-Act Plays in the fall of 2019. Also, Dwyer's play was the only original writing performed during the 2019 one act performances.