Lisle looking to be back to full strength as it enters the Class 2A state playoffs as a regional No. 1 seed 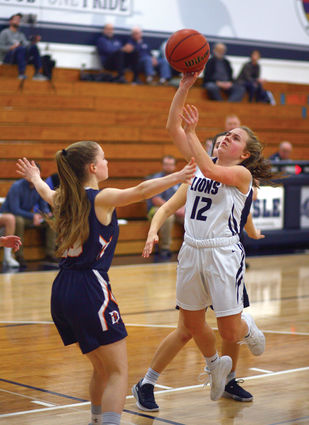 If healthy, Lisle hopes to make a push at conference and regional titles in the coming weeks.

Things were going well for the Lisle girls basketball game up until it met up with Aurora Christian on Jan. 25.

The Lions entered the game with a 20-4 record and were on their way to an IHSA Class 2A top seed.

On that Saturday, not only did Lisle drop the game 75-27, it had three players suffer injuries.

That coupled with an illness, and the Lions 1-2 over their next three seeing the only two consecutive losses all season.

"We have to get healthy," coach Nick Balaban said following Saturday's loss to DePaul College Prep. "We had four guards to start the season, now we have one. (Emma) Webb has been out since mid December, our leading scorer Cassidy Allen hasn't played the last two games with illness and Ainslie Klein, our first guard off the bench, she didn't play because of her hand. We suffered three injuries in one game (vs. Aurora Christian).

"Abby Casmer came back after missing a couple games, so we just need to get healthy. We are limping here at the end and it puts a lot of stress on Tara Kane."

A healthy Lisle squad proved how good it can be all season and the coaches in the area took note, as the Lions earned the top seed in Sub-Section B of the Class 2A Peotone Super-Sectional.

The silver lining in the fact that the Lions have played the last few games missing key players is that reserves are thrust into important roles, which could pay dividends in the long run.

"If we get into the tournament and we get in foul trouble, maybe I can put someone into a situation that they have experience these last couple weeks," Balaban said. "We made a decision against Manteno to dress the whole JV program because we went there with four varsity players. The last three games we have had 12 or 14 people in uniform."

Lisle will open play on Feb. 11 at its own regional when it will face the winner of No. 7 Crane Medical Prep and No. 9 Chicago Military Academy-Bronzeville.

A regional title match up would be Feb. 13.

If the seeds hold, that game would be against No. 4 seed Chicago Perspectives, who will play the winner of No. 5 Westchester St. Joseph and No. 11 Westmont in the other semifinal.

Before the Lions can concentrate on winning a regional or beyond, they first have to focus on winning the Illinois Central-8.

"We don't want to share that title with anyone," Balaban said. "Winning the conference in its inaugural year will be a big thing."

For a shot at the league championship, Lisle will host Wilmington Wednesday.

Lisle has high expectations of itself as the season winds down and if healthy, the goals are attainable, however, with no seniors on the team, every experience is a big one for the young Lions.

Balaban said, however, that just because there are no seniors on the roster does not mean there is no experience and leadership.

"We don't have any seniors, but don't get it wrong, we have some juniors with some experience that are good leaders," he said. "They play other sports with each other and they are leaders on those teams as well."