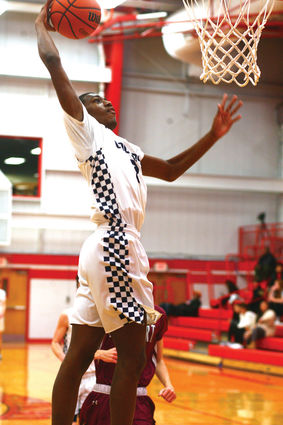 The first three quarters of the nightcap of the Will County Hoops Invite at Lewis University, the game was an individual, three-point shooting contest between Lockport junior Matas Deksnys and Cougar senior Devin Jones. After three, hard-fought quarters of play, the Porters clung to a 42-40 lead.

Deksnys buried four three point bombs, while Jones had matched the Porter sharpshooter with four of his own.

Ignited by their teammate's artillery display the Porter defense clamped down on the stunned Cougar (7-17) shooters and Lockport rolled to the 62-50 victory.

"I have been working very hard in practice on my shooting," Deksnys said. "I have been very confident in my outside shot and I have been in a zone, as of late."

Cougar senior, TJ Williams (11 points, eight rebounds, two blocks, two steals), along with Jones, each hit from downtown to open up a 9-0 lead for South in the first three minutes of the game.

Junior Sam Trafton and sophomore Ethan Gallagher came off the bench to pull the Porters within 13-10, after one quarter.

Lockport grabbed a 27-24 lead at the halftime break.

Trafton (nine points,seven rebounds) score dseven of his nine points in the first half.

"I was very happy with the way I rebounded tonight," Trafton said. "I was able to get some put-back baskets, as well, something that I was not able to do last night."

DiCristofano, who scored 11 points and haul ed down seven rebounds for the game, grabbed four of those seven rebounds off the offensive glass in the crucial fourth quarter.

"I was very aggressive in the fourth quarter, which allowed me to get the offensive rebounds," DiCristofano said.

"It was a very good bounce-back win after last night's loss to Bolingbrook," Lockport coach Brett Hespell said. "For the first three quarters, we didn't play well on defense. In the fourth quarter, we really clamped down on them, to get this win.

"Matas hit six, three's for us against Bolingbrook last night. He has been working very hard on his shooting and is in a zone right now. Just a junior, Sam Trafton, was outstanding off the bench for us and did an outstanding job rebounding. Tim (DiCristofano) is a senior for us and played well tonight."