From Loincloths to Lingerie: Slip Into the History of Unmentionables

During the February 15 program, Russell said she will focus on the practicality and style of undergarments through the years 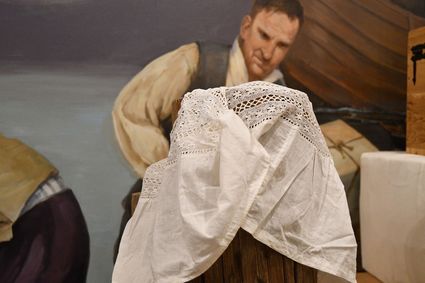 Sara Russell, an interpretive naturalist at the museum, said her interest in the history of underwear grew out of her role portraying Jeannette, a French woman from Quebec, as part of her historical presentation of a person from the 18th-century fur trade era.

We shimmy into skivvies or pull on brassieres every morning, but how much do we really know about the evolution of undergarments?

As Valentine's Day – the holiday most linked to lingerie and underwear – approaches, the Forest Preserve District is inviting you to delve deeper into this topic. "What's Under There?: A 'Brief' History of Undergarments" will be offered from 2-3 p.m. Saturday, February 15, at Isle a la Cache Museum in Romeoville. Registration is required; sign up online or call 815.886.1467.

Sara Russell, an interpretive naturalist at the museum, said her interest in the history of underwear grew out of her role portraying Jeannette, a French woman from Quebec, as part of her historical presentation of a person from the 18th-century fur trade era.

"Before each program, I dress in layers of skirts, stockings, and a blouse with a hand-woven belt that I can attach all kinds of handy gear – keys, whistles, pocket watches," she said. "This has really given me an appreciation for how people lived in the past that I wouldn't have gotten any other way.

"The skirts are brilliant, just one long rectangle of fabric that was sewn into a circle, then cinched and tied at the waist," she said. "You lose weight or gain it, no problem! Cold day out? Add an extra layer. Hot day? Just swish like a bell to encourage circulation. These are things that I might not have ever fully realized or appreciated until I wore these clothes four days a week for a couple months at a time."

But once she researched the skirt and other articles of clothing from the French fur trade era – a time period that the museum specializes in – Russell said her curiosity grew about the history of underwear.

"So, it turns out there's a long and fascinating history of undergarments," Russell explained. "You can find banded wrappings around women's torsos in ancient Greece, and Egyptian pharaohs wore something that looked a little like diapers around their waists. And the loincloth is found all over the world. Historians originally thought bras were a 20th-century invention, but much to archaeologists surprise, four medieval bras were found beneath 15th-century floorboards in Austria."

During the February 15 program, Russell said she will focus on the practicality and style of undergarments through the years, especially the 18th century. For instance, one common 18th-century undergarment was the chemise.

"It looks a little like a slip or nightgown," she said. "It is loose with sleeves and it can be pulled tighter with a string at the neckline. It could be made of cotton or even wool, but the best fabric was linen. It's absorbent and fast drying."

The chemise was popular during this time period because washing clothes was time consuming and harsh soaps could expose clothing to more wear and tear.

"After all, clothing was expensive and took a lot of effort to make, so it was made to last a lifetime, even upcycled and passed on to the next generation," Russell said. "People didn't often clean the outer layers. It's the chemise that absorbs all the oils and grit from the body and protects the outer layers. It's the chemise that gets washed regularly."

Russell said she also will talk about women's briefs.

"People might be shocked to learn that women's underwear as we know it today – close fitting briefs – didn't generally exist until the 1930s. Eighteenth century women would have found them a burden. Imagine trying to use an outhouse or chamber pot with layers of long skirts ... and dealing with briefs on top of it. They just went without!"

Some undergarment choices are dictated by fashion, though.

"We can understand a lot about undergarments when we look at the silhouette people were trying to achieve," Russell explained. "Want a small waist and flat chest? Stays are your answer. Need to emphasis the hips? Add a bum roll, which is basically a stuffed tube of fabric tightened at your waist.

In addition to French colonial garments, Russell said she will touch on Potawatomi clothing too, since the Native Americans also were a part of the fur trade era.

Russell said she is excited to present the program because it will offer a view of just one more facet of life in previous eras.

"I've always been interested in history's everyday routines: how do people eat, how do they light their houses, or take care of personal matters. Some people might think that nothing is more personal than what you wear next to your skin. These aren't big events that make history books, but they make people from the past more real to me."