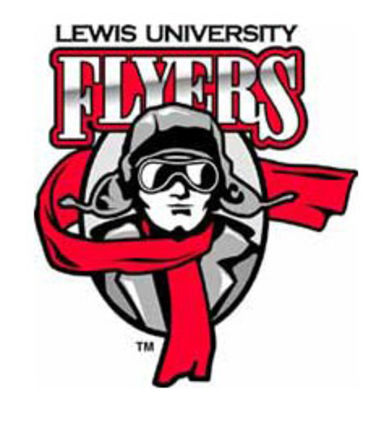 The Flyers improve to 5-3 while the Golden Eagles fall to 1-7.

Lewis used a 7-2 run midway through the opening set to break open a close match as it went onto win 25-15.

The second set featured 12 ties and three lead changes. Lewis closed the set scoring eight of the final 13 points to break a 17-all tie to win 25-22. Mitchem and Ryan Coenen (Franklin, WI/Franklin) teamed up for nine of the team's 12 kills in the stanza.

The Flyers led for almost all of set three. They pulled away from Charleston with an 8-3 run to extend its lead to six points.

The Golden Eagles wouldn't get closer than five points the rest of the match as Lewis prevailed 25-15.

The Flyers hit .368 (36 kills-8 errors-76 total attacks) and were led by Mitchem with 10 kills while Bugée added nine kills.

Lewis' women's basketball team had its eight-game winning streak snapped in a 71-60 loss to Missouri-St. Louis at Neil Carey Arena on Saturday afternoon.

UMSL never trailed in the contest as they opened the game on a 9-0 run. Lewis cut the deficit to four at one point but were unable to get over the hump as the Tritons took a nine-point lead into the second quarter.

The Flyers cut UMSL's lead to three points late in the second quarter but two free throws by Laura Szorenyi and a basket from Kiara Stewart gave the Tritons a seven-point cushion.

Lewis had a chance to cut the lead to three again but missed 2-of-4 free throws in the final 0:15 of the half.

UMSL held the Flyers scoreless for the first six-plus minutes of the second half to extend their halftime lead to 14 points.

Lewis cut it to nine at one point but the Tritons closed out the quarter scoring five of the final seven points to head into the final frame with a 54-42 lead.

UMSL couldn't get much going offensively in the final quarter but neither could the Flyers as the margin remained in double digits.

Lewis cut the lead to seven on a three-pointer from Rachel Hinders (Johnston, Iowa/Johnston) with 0:38 left but the Tritons hit four free throws in the final 0:24 to secure the victory.

The Flyers were held to under 40 percent shooting in the contest, was 8-of-23 from three and shot just 67 percent at the foul line. They outrebounded UMSL 36-34 but turned the ball over 17 times which the Tritons turned into 18 points.

The Lewis University women's bowling team went 7-6 this past weekend at the Columbia 300 Saints Invite at Bowlero Chesterfield, finishing the tournament in 12th place. The Flyers averaged a 178.2 for the tournament and now have a record of 39-25 overall.