In four years under Lincoln DePaula, Plainfield South girls basketball is heading in the right direction 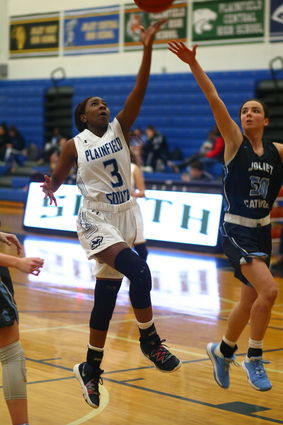 As a program, Plainfield South is on the rise.

When Lincoln DePaula took over the Plainfield South girls basketball program, the team had not had much success.

In DePaula's first year it was much of the same as the Cougars posted a 4-20 record, but since then, the program has been headed in the right direction.

After wins over Joliet Catholic Academy and Plainfield North last week, the Cougars were 12-9 and

"I remember the season four years ago, and it was a tough one," DePaula said. "But we were building something. Sometimes we have to step back when we play well against good teams and the results aren't there and it gives us perspective of how far we have come. We have to continue to grow and there will be bumps in the road, but every team goes through that."

The backbone to the Plainfield South team since DePaula took over has been defense and that is no difference this season.

"We play a zone because a lot of girls don't have the experience, but it gives them a chance to use their athleticism and read passing lanes and it is hard to play against when we are clicking," he said. "What keeps us in games is our defense. If we don't score, they can't score."

South is in what has proved to be a tough Southwest Prairie Conference, but DePaula understands the Cougars have to face top teams in order to get the program to the top – and that is what they are doing.

"Your conference is given to you, but we always try and play the best competition," he said.

DePaula does understand that the players on the roster this season are reaping the benefits from the players the past four years that laid the groundwork for the current success.

"Some of them come back, we had quite a few back over Christmas break and that is our message – everything that we have accomplished is because of what they built," DePaula said. "Sam Lordan, Shannon Smith, Anya Brooks, Jaianna Brooks, those girls raised the standard every year. Now do we want to be a .500 team or do we want to beat the teams we are not supposed to beat?"