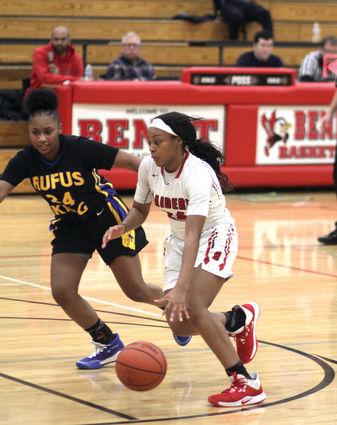 Add to that, the nine missed lay-ups and it was not too surprising the Raiders could not get out of Flossmoor with a victory over the Associated Press' Illinois Class 4A No. 9-ranked Lady Vikings.

The Lady Raiders entered the SWSC Blue showdown ranked No. 11 in the rankings.

"Missed free-throws and missed bunnies have been our Achilles heel all season," Bolingbrook coach Chris Smith said. "Homewood-Flossmoor is too good of a team for us to beat playing as we did tonight."

The two SWSC-Blue powers battled to a 24-24 tie at halftime.

Thompson scored nine of her points in the first half to lead Bolingbrook. H-F was led by 6-foot freshman Alyssa Latham (14 points, six rebounds) who scored half of the Lady Vikings points in the fist half.

The crucial fourth quarter began with H-F up 35-30.

H-F opened up a 41-35 lead with 5:13 left. Sophomore Miranda Fry scored inside to bring the Raiders within four at 41-37. Senior Kyla Matthews (four points) converted 1-of-2 at the line at the 3:58 mark and Perkins scored and pulled the Raiders within one, 41-40 with 2:49 left. The Vikings opened up a 45-40 lead with 1:13 remaining before the last Raider last gasp. With 51 seconds left, Thompson scored and the Raiders turned the Vikings over. Senior Jayden Marable (six points, six rebounds), was fouled and had two shots with 32 seconds remaining in regulation. Marable went 1-for-2 at the line. H-F's Tia Morgan (eight points) calmly sank her third and fourth consecutive free throws to conclude the game scoring. The Vikings converted on 12 of their 14 charity tosses before missing front-end of one-and-ones with 10.1 and 1.1 seconds remaining in the game. H-F junior Grace Hall led H-F with a double-double 17 point,12 rebound game. "I was very happy to be able to play tonight, " said Thompson, who has been battling illness. "We missed too many, free throws and too many easy shots. We have no one to blame but ourselves. I am proud of the fact that we did play with great energy in the fourth quarter." The rematch of the two teams in on Tuesday, Feb. 11 in Bolingbrook. "H-F has to come to our place," Smith said. "Hopefully we can play well and avenge tonight's tough loss."