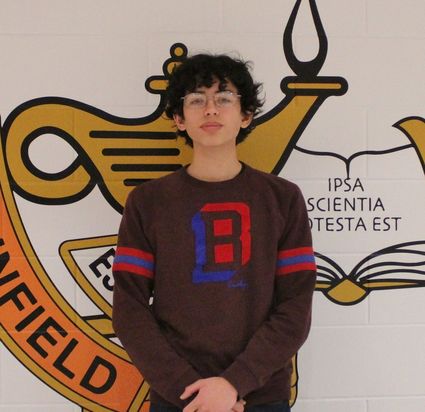 Plainfield East High School senior Lucas Del Rosario exceeded even his own expectations when he received a perfect "36" on the ACT college entrance exam in December 2019.

"It was definitely a pretty difficult test, there were a lot of problems that I really had to think about," Del Rosario said. "Overall though I thought I did pretty well, but I never thought I could do that well."

Del Rosario challenged himself by taking both the ACT and SAT exams to see which one he was better at.

"Both tests are structured differently, and I wanted to see which one I could do better at, even though both tests are not required," he said.

Studying was the key to earning a perfect score on the ACT for Del Rosario. He completed a series of practice tests at home and utilized free online study tools.

"It is a very fast-paced test, so I took practice tests to be aware of how fast I needed to answer the questions," he said.

"There were a few times when I was taking the practice tests that I went too slow and had to rush through to the end. It is important to practice the time limit and be able to get through all of the questions."

Del Rosario is happy with his results but reminds his peers anyone can achieve a perfect score.

"As long as you put in a lot of hard work and study, I feel it is an achievement many people can get to," he said.

With graduation only months away, Del Rosario plans to go to college but has not decided where he is going as he is undecided on what he wants to study.

"His work ethic and character will continue to guide him to many more successes. We are extremely proud of Lucas and this amazing accomplishment," O'Brien said.

The event will feature poets from other District 202 high schools as well as PHSCC.

The Slam is free and open to the public. Free popcorn will be served.

"We also thought it was important for students to have a space where they are able to connect with African American authors and understand how important it is for their voices to be heard," Charleston said.

The slam is part of Black History Month events in February at PHSCC that include hall decorations and a soul food staff lunch.