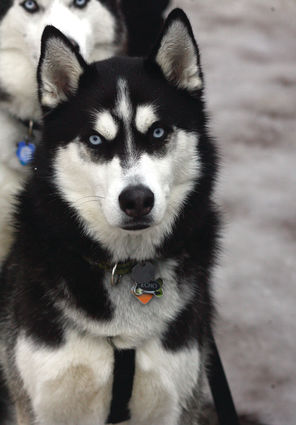 While the Morton Arboretum in Lisle has a focus on trees and educating the public about trees and their pivotal role in the ecosystem, there are events that happen on the 1,700-acres in between the trees that also bring the community in.

Last weekend, patrons flooded the grounds on two chilly, snow covered days of demonstrations of husky sled-pulling and skijoring where the dogs pull a person on skis.

Huskies were on hand to be adopted from Adopt-a-Husky, the presenters of the two-day event.

The sled demonstration was originally part of a larger winter event held at the Arboretum, but eventually became the sole activity for a one-day event, which because of popularity, grew to the weekend experience it is now.

"This is our second longest running event, we are on year 18 now," said Mary D'Amico, special events coordinator for Morton Arboretum.

. "The dogs are a huge attraction. Everyone likes to go see dogs anyway, but when you can see the Siberian Huskies pull sleds, it is something you don't see around here very often. It is a very unique event.

"We want to bring people in all year round. We feel that you can be doing something outside 365 days a year and this is a great way for people to experience the winter and being outside."

While events like the dog sledding is a way to get people into the arboretum to experience what it has to offer.

"Our mission is around trees and there is beauty in the trees and in nature no matter when you come here," D'Amico said. "Trees provide something every day."

And while the trees are the mission of the arboretum – the dogs were a big hit.

With enough show to pull sleds and not modified rigs on bike wheels, the demonstration gave the visitors a look at what the huskies were bred for.

The organization serves Illinois and Wisconsin and has a mission of saving huskies from shelters, especially kill shelters, and placing them in new, permanent homes.

"We are their last chance if they are in a kill shelter," said Noel Dagley of Adopt A Husky, Inc. "We have a waiting list of dogs to come in and we take the ones from kill shelters first because they don't have any time left. Our focus is around the dogs and keeping their needs first." 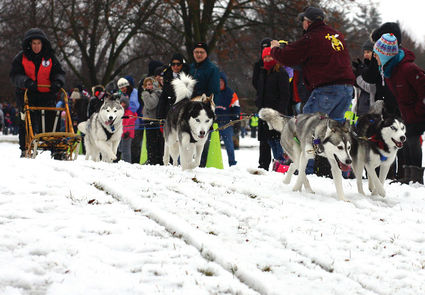 The adoptable dogs as well as the sled dogs were accessible to the public at the event and from their reaction, the dogs seemed to love the attention as tails were wagging and kisses were given to children and adults alike that interacted with the huskies.

While the Husky Heroes event is completed for another year, patrons don't have to wait around to find fun at the arboretum as it is open all winter.

The ever-popular troll hunt is an activity for any season and while the dogs are expected to be back next winter, the 15- to 60-foot wooden sculptures by Danish artist Thomas Dambo will only be hiding among the trees of the Morton Arboretum until June of this year when they will be removed.