Help reverse honeybee decline by signing up for beekeeping course 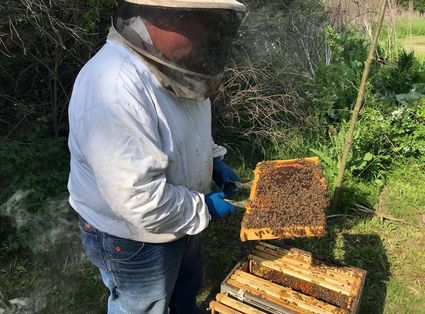 If you want to find a new, fun hobby that can also reverse the decline of honeybees, consider signing up for the Forest Preserve District's "Bee a Beekeeper!: Introduction to Successful Beekeeping" program.

If you want to find a new, fun hobby that can also reverse the decline of honeybees, consider signing up for the Forest Preserve District's "Bee a Beekeeper": Introduction to Successful Beekeeping" program.

The course will cover beekeeping's history and cost, the anatomy and life cycles of bees, hive equipment and management, and colony dynamics.

People who have taken the course in the past have found it very educational and helpful, said Kate Caldwell, a Forest Preserve District interpretive naturalist who oversees the program.

"They stop into the nature center and let us know that their bees are alive and they survived the winter," she said. "Another beekeeping student has become a volunteer with the Forest Preserve because of the class!"

"He has great presentation skills, is passionate about bees and he takes his time so people can digest the information they are receiving," she explained. "And his students have commented on how approachable he is when they have questions."

According to class comment forms, students signed up for the course to sharpen their beekeeping skills, learn more about honey and native bee conservation, and to get their children interested in the hobby. They also enjoyed meeting other people who are interested in beekeeping and learning about beekeeping equipment and best practices in dealing with issues that can affect hives.

And in at least one case, a person signed up for the course to overcome a fear of bees, Caldwell said.

Beekeepers play an important environmental role, so increasing their numbers is a prime reason for the class offering, Caldwell said.

"Anyone can be a beekeeper," she said. "It can only improve your community, you as a person and the planet."

The role honeybees play as pollinators is crucial to a healthy environment, Rusnak said. One beehive can conceivably pollinate plants within 100 square miles.

Rusnak said getting bees to stick around is easy.

"The greatest part about using honeybees as pollinators is that they are easily manageable," he said. "That is why beekeeping is becoming popular."

Creating more beekeepers is important because honeybees are in trouble.

"Honey bee health decline has been documented for years," according to a report released January 13, 2020, by the U.S. Department of Agriculture. "Over the last 8 years, winter losses have been unsustainably high ranging from 22 percent to 36 percent nationally.

The losses threaten the production of crops that depend on bees for pollination, especially nut, berry, fruit and vegetable crops, the report stated.

Honeybee populations are being challenged by man-made pressures including pesticides, monocultures, transportation stress to pollinate crops and lack of diversity.

"This class will make participants part of the solution," Caldwell said. "Becoming a sustainable beekeeper will help promote plant diversity by changing the factors that lead to bee decline."