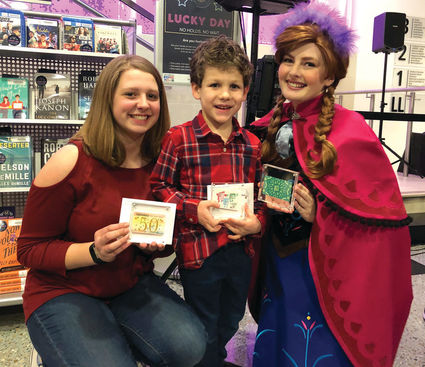 Fountaindale Library in Bolingbrook is celebrating its 50th anniversary and because of that is giving a special gift to its patrons.

"We've made an effort to grow with our community which is why I think we've been successful for the past 50 years," said Communications Manager Melissa Bradley. "Our goal as a staff is to just keep meeting the needs of our community."

The library district first opened in 1970 in a small classroom inside Park View School, which is now R.C. Hill Elementary School in Romeoville.

In August 2008, the Romeoville building was transferred to the then Des Plaines Valley Library that is now White Oak Public Library District.

In 2009, the groundbreaking for the new Bolingbrook Library was held and the new library opened on March 7, 2011, and the old building was demolished.

To celebrate the milestone, the public had to come to a conclusion about which library card was going to be utilized going forward, and the cards were designed by members of the community during last fall's library card design contest.

During the fall contest, more than 70 entries for new card designs were submitted, and the staff narrowed down the three best designs to choose from.

The three categories that the designs fell into for choosing the new library card were from ages 12 and younger, ages 13 through 17 and then anyone 18 or older.

After the three designs were narrowed down, they were then put online for public voting where one winner was chosen from each category.

"We have about 36,000 people actively with library cards," Bradley said. "This design was pretty cool because the public got to pick the three cards."

The three winners that were eventually chosen from the contest were Alissa Melville, Cara Sortino and Dominic Guidice.

"All three of the designs were absolutely gorgeous and we couldn't be more excited for the winners and the designs themselves," Bradley said. "They really all did such a wonderful job on them."

In one of Fountaindales most recent events to go along with the new library card design, they hosted a Winter Carnival that featured a performance and meet and greet with "Frozen" princesses Anna and Elsa.

Also with the carnival, there was laser tag, a balloon sculpture live art show, live music and games and prizes.

"The Winter Carnival was a huge success because we had more than 1,000 people in line to not just see the carnival, but see the new library card designs as well," Bradley said.

The new library designed cards are free of charge for those who want to see the designs or obtain one. To get a new library card, someone must be resident of the library district and present two forms of ID that shows a current address.

"It's been so fun to see how everybody has their own favorite design," Bradley said. "Each design represents something different in the library so I also think that's why they have been so popular so far too."