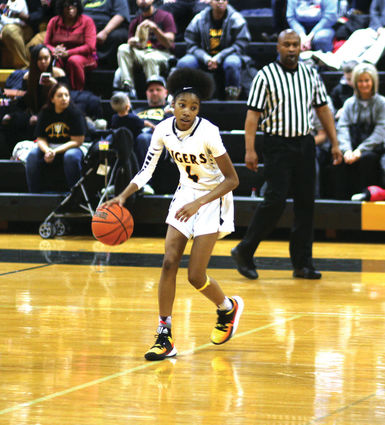 Winning streaks are hard in sports, especially when that streak is at 13 consecutive games.

"One thing about this girls is that they're both very intelligent on and off the court," said coach John Placher. "It's starting to get really fun here watching these kids play."

In the Tigers most recent 73-45 victory against Plainfield North (12-10, 5-5), senior guard Jazz Evans led the way with 26 points and freshman guard Lisa Thompson had 20 points.

"Our coach always tells us that with this winning streak teams are always going to be coming for us so we always have to bring out our best and play the way we know we can play," Evans said.

The Batman and Bobin duo of the West team have been the two guards who have led them all season, but Placher said the role players have also contributed to the success that they have had this year.

"I really can't say enough about our role players," Placher said. "Symone Riley, Maliyah Walker, Akeisha Watson and Destiny McNair coming off the bench we really have a nice seven man rotation and we don't really lose anything when they're in there."

For North, a relatively young team with one sophomore and two freshmen on the roster, are led by their five seniors who coach Michaela Reedy said are their leaders on and off the court.

"We have three senior captains this year," Reedy said. Natalie Bearbower has been a huge influence in the game the last month in a half for us and keeps the glue, Marissa Mussatto focuses on her post moves but can shoot threes, Kathryn Jasko brings the most fire on the floor and Kayleann Scholz, who is referred to as the fan favorite, hits a lot of threes for us."