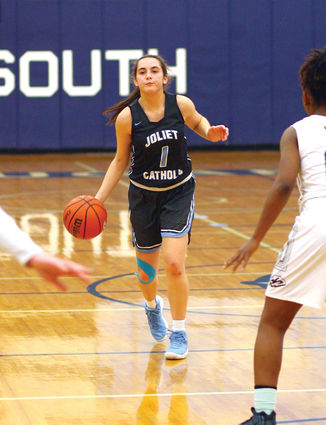 Heading into her senior bastketball season, Mia Bertino was already a decorated athlete as a four-time state qualifier for the Joliet Catholic Academy tennis team.

On January 19 against Providence Catholic at the Bishop McNamara MLK Day tournament, she added to her accomplishments when she became one of a handful of players in Angel lore to record 1,000 career points.

“It was a surreal moment,” she said. “I didn’t know I was at 1,000 at that point, I thought I still had a way to go. Coach had let me know I was on track and when I saw my teammates coming at me, I knew I had hit 1,000. My supportive teammates made it a great moment.”

Bertino, who will play tennis next year at Valparaiso University, has been a tennis and basketball player on the varsity level since her freshman year.

On the tennis court she was the team’s No. 1 singles player, which she maintained her entire career, and helped the Angels to a second-place finish at state.

On the basketball court that same season, Bertino played through a winless 0-27 season – just three years after JCA had posted a 28-3 record and placed second in Class 3A.

“My freshman year, we were 0-27 and that can be demoralizing, but we have come a long way. We have a positive mindset and we work well together,” she said.

The wins have added up each season since 2016 and the Angels earned win No. 14 against St. Francis in a game where Bertino dropped 29 points.

Players like Kiana Smith and Jasmine Brown and their ability to get to penetrate and find Bertino for open shots has aided her game this season.

“I have a quicker release now than when I was a freshman,” Bertino said. “I want to be the best threat I can be.”

She has been a threat on both courts her entire career.

Bertino wrapped up her tennis career with a perfect 28-0 regular season record and finished fifth in the state at No. 1 singles. She was all-state all four years at JCA and was East Suburban Catholic Conference Player of the Year her final three seasons.

“I love being a multisport athlete,” she said. “I think the sports compliment each other well with the footwork and I love both sports.” 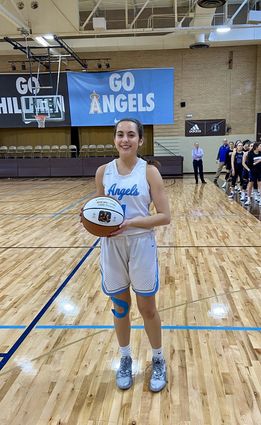 Playing more than one sport is something the basketball coaching staff supports.

“We encourage multisport athletes in the program,” JCA coach Jim O’Brien said. “We work with them so they can get other sports in and get back for basketball. It is a great atmosphere and the support we get from the athletic department and administration - it is just a great place. Our seniors were part of the 0-27 season and this has been a lot of fun. I give the seniors a lot of credit for sticking with it and it has been a lot of fun. They are leading this younger group who is buying into what we are trying to do.