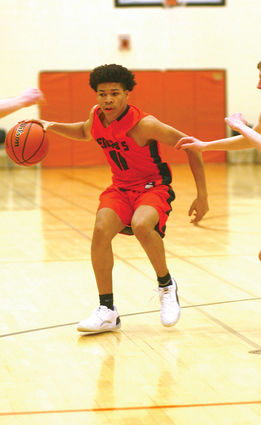 Back on December 10, Plainfield East defeated its District 202 rivals from Plainfield South 55-53 in a Southwest Prairie Conference East Division battle.

When Plainfield South's senior, Timmy Williams (seven points) scored to give the Cougars a 57-46 lead with 3:31 remaining, everything was bright for the Cougars.

It was starting to appear, that Plainfield South would be playing for the consolation championship - not so fast.

Led by a 10-point fourth quarter explosion from Plainfield East junior Mike Landa (10 points, four rebounds), the Bengals pulled to within 59-57 with 39 seconds left in regulation.

South's Brennan Phillips (seven points) scored on a perfect feed from senior Peyton Schmid (nine points, three assists, three rebounds) to give the Cougars a 61-57 lead with 20 seconds to go.

Simmons calmly hit the front end of the crucial one-and-one and then sunk the second shot for a 63-57 Cougar lead.

Simmons was fouled and with ice-water in his veins, knocked down a pair of free-throws and a 65-60 win for the Cougars.

"I had to go to the line and get the job done," Simmons said. "This was a big win for us."

"I came out with a lot of energy and hit my shots in the first half," Jones said. "We wanted it more than East did. They beat us earlier in the season and really wanted to win."

"We played solid defense and came away with a big win," Schmid said. "Box out. We must box out and play good defense."

With the win, Plainfield South (6-14) advanced to face Rockford East (12-8) for a consolation championship.

"Again we won this game with our solid defense," Plainfield South coach Tim Boe said. "Devin had a big first half for us and Jordan knocked down the huge free-throws to win the game."

"Our whole team made a great comeback in the fourth quarter," Landa said "I was able to get the ball inside and hit my shots. Another tough loss for us."

"We came out flat today and we will not beat anyone without energy," Plainfield East coach Mike Fowler said. "Mike Landa had a great fourth quarter for us."

Trailing Rockford East 52-41 with 3:45 remaining in regulation, the Cougars launched a furious come-back.

Junior Amarion Molette brought South within 52-45 with his bucket.

The E-Rabs picked up a free-throw before Simmons buried a three and the Cougars were within 53-48 with 59 seconds left. The E-Rabs turned the ball over and Jones (13 points) got South within 53-50.

With 13.2 seconds left Schmid (eight points) nailed a pair of free throws to pull the Cougs, within one at 53-52. With eight seconds left Rockford East made one of two, for a 54-52 lead.

On the final play of the game, South's Timmy Williams (14 points, three 3's) last second two-point runner was in and then spun out.

Heartbreak for the Cougars.

"We played hard. It's not how you start, it's how you finish," Boe said. "I give credit to the kids for their effort.

We won two games in one of the best MLK tournaments, in the state."

With four seconds remaining in this SPC East battle, Landa's free-throw tied the game at 55 and sent it into overtime.

In the overtime the Steelmen (10-14) converted on five free throws from KJ Sutton and Key Hargrow for the win.

The Bengals (4-19) would not score in the overtime.

"We just are not playing good basketball," Fowler said. "We just continue to find ways to lose games. We get to play both Plainfield South and Joliet Central again this season. Maybe we can play well and get some revenge."