Maine South, Niles West are at different points in the program as Hawks feature experience, Wolves gaining it 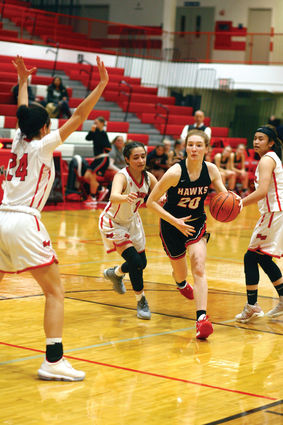 Senior Greta Miller is one of the veteran players leading Maine South.

Maine South and Niles West high schools are separated geographically by less than six miles, but this season, their girls basketball teams are separated by light years.

The Hawks are built around a core group of two seniors and three juniors who gained varsity experience together a season ago.

The Wolves, on the other hand, have only two seniors on a junior-dominated roster. West is working on replacing 10 seniors from last season's team, including Enterprise Publications Player of the Year Sam Galanopoulos, who is averaging 4.2 points per game as a freshman at Loyola.

"We lost 10 seniors last year, including Sam, so, this team coming in, every single opportunity we have is a new experience," said Niles West coach Kyle Braheny. "If you look at us from the beginning of the season to now, we are improving. Against a team like Maine South who is very talented, we gave good effort and that is something you want to see from a young team like us. I am very happy with our effort and we are getting better."

"We are playing better basketball in the last month and we want to keep that going," Maine South coach Jeff Hamann said of the Hawks. "We are playing some really good competition and it is going to continue as we go through January and in the playoffs. Our conference is one of the toughest in the state and when we schedule our nonconference, we want to play the best in the area because that is what we feel we are as well."

While Maine South relies heavily on juniors who still have a bright future after this year, Hamann knows with their experience, the team is built to win right now.

"When the three juniors that are starters with Manolis and the two Gardiners, we saw them come in and they are special kids and they were on JV as freshmen and last year, three of our top six were sophomores. Now we are reaping the rewards," he said. "We have two seniors that play meaningful minutes for us and we have two sophomores up again that play meaningful minutes, so that is the process every year.

"We are focused on this team right now and doing the best we can with the season we have in front of us, and that is really all we can control. Of course we are excited for the future, but we are also excited about right now." In Hamann's first year a season ago, the Hawks went 19-11 and fell to Evanston in the regional final, but he said the team is well aware of the program history and wants to return to glory.

The Hawks last sectional title was on 2011 when they placed third in state in Class 4A.

"They know the history. With coach (Mark) Smith, the program won 10 regionals in 13 years, made it downstate twice - this is a storied tradition. Our assistant coach was an all-stater for us in the early 90s and if you look in the state record books, the programs is up there in wins as a program, so the girls know," Hamann said. "We talked about it the other day after film, that it means something to wear the Maine South jersey and these girls are buying into it and it shows in their play."

The biggest thing that Niles West could take away from the 28-point loss to the Hawks is seeing what the process allows and seeing where it wants to get.

"I look at our schedule in the CSL South and we are facing top programs in that state and they are only going to make us better," Braheny said. "They care so much and you can see them frustrated and I tell them, this is a process. The end goal is not to be your best right now. The plan is to get better your junior year and your senior year is when you want to be playing your best basketball. I respect them because the care so much, they just have to stay positive."