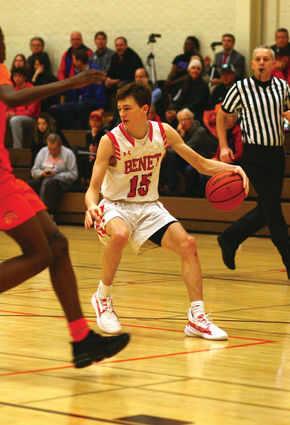 In their first-round game, at 9:30 a.m, the Redwings, started slow but would cruise past Plainfield East 59-42.

The Trojans had to rally past Glenbard North 49-44 in a game that was played at 11 a.m. to set up the quarterfinal match-up between the two neighboring rivals. The two schools are just three miles apart.

Behind a 21 point, 10 rebound performance, from their 6-foot-8, Johns Hopkins University-bound center Colin Crothers, Benet (13-4) rolled to the 54-41 victory.

The Trojans (10-8) behind their 6-foot-5 junior Kyle Engstler opened up a 10-2 lead in the first three minutes of the game.

Engstler buried a pair of long-range three-pointers and scored again inside to give the Trojans the early eight-point lead.

As they did in their morning game against Plainfield East, the Redwings trailed 13-10 after one quarter.

The Trojans could only score four points from 6-foot-7, junior Kevin Bozeman in the entire second quarter.

With 1:16 remaining in the half, a Crother's old-fashioned three-point play was followed by a steal and score from Redwing senior Matt Reid (four points, two assists, steal) for a 19-14 Redwing lead.

Reid, had recently rejoined the Redwings, after a month-long bout with mononucleosis.

Bozeman nailed a clutch three-pointer to bring the Trojans within two, 19-17, at the half.

Benet put this one away in the third quarter.

Redwing 6-foot-3 junior Jack Prock buried a pair from behind the arc for a 36-27 Benet lead.

Colin Gillespie (six points, two 3's), who in the fall quarterbacks the Redwing football team, buried a long-range three pointer for a 36-27 lead.

"This was a good team win over a solid Downers Grove North team," Crothers said. "I have total confidence in the ability of our outside shooters to knock down their shots. By making their outside shots, that opens up the middle for me and makes us very tough to beat."

"We started slow again and we have to work on that," Van Eeekeren said. "Once we got past the slow first quarters, I thought we played really well today. We are happy to be in the final four and we know we will face quality teams.”

The conclusion of the tournament was held Monday on Martin Luther King, Jr. Day and finals were after press time.

Engstler led the Trojans with 13 points, while Trojan leading-scorer Jack Mielke scored a dozen points and hit from beyond the arc twice.

“We didn’t play very well but it was still great, to pick up the two victories today,” Benet Academy coach Gene Heidkamp said. “The whole season has been a work in progress for us. First we lose Colin, at the start of the season and then we get Colin back and lose our leader Matt Reid.

“Colin was an inside force for us and Jack was outstanding hitting his three’s to help us beat Plainfield East this morning. I’m excited about how much better we will be the more Matt and Colin work together.”

The Bengals (3-17) jumped out to a 13-10 first-quarter lead, paced by a pair of three-pointers from downtown Wheaton by sophomore Toby Onyekonwu (nine points, three 3’s).

Prock (15 points, four rebounds, three 3’s), buried his second, three-pointer, of the game and went on to score nine, second-quarter points, to lead the Redwings, to a 29-20 lead at the break.

In the third quarter, Benet would go to their inside game.

Crothers (12 points, 14 rebounds) and 6-foot-4 Jake Snell (eight points, four rebounds), would score 10, third quarter points between them, as the Redwings, would outscore the Bengals,19-7 in the quarter for a 48-27 lead after three quarters.

Plainfield East senior Nick Smoldt would lead the Bengals with 10 points, while 6-foot-4 junior Mike Landa, chipped in with six points and hauled down four boards.

Van Eeekeren buried a pair of three-pointers for his six points for Benet.

Scoring 14 of his game-high 24 pointsin the fourth quarter, sharp-shooting junior Jack Mielke put the Trojans on his back and led them to their first-round victory.

With 3:13 left in regulation, Mielke buried a three to give the Trojans a 37-35 lead. Glenbard North’s 6-foot-5 junior Jerry Abushanab’s two-free throws tied the game at 37-37.

Mielke struck again from behind the arc for a 40-37 Trojan lead. 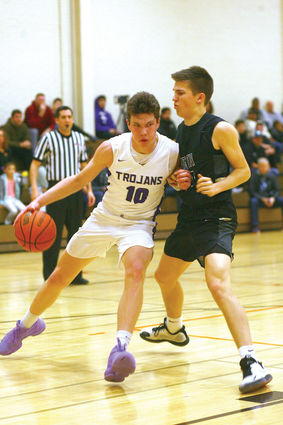 Seconds later, Abushanab burying a 25-footer tied the game at 40-40.

Engstler (12 points) gave the Trojans a 42-40 lead. Glenbard North, would pull to within 42-41 on a free-throw by Jake Bomema (six points). Mielke’s two free throws extended the Trojan lead to 44-41 with under a minute to play.

Seconds later, Mielke buried his third, three-pointer of the quarter, for a 47-44 Trojan lead. Murray would miss. Mielke, grabbed the rebound and nailed a pair of free-throws to finish off the Panthers.

Trojan sophomore Griffin Illyavi chipped in with eight points for the victorious Trojans.