Ties to red light camera industry at heart of indictment 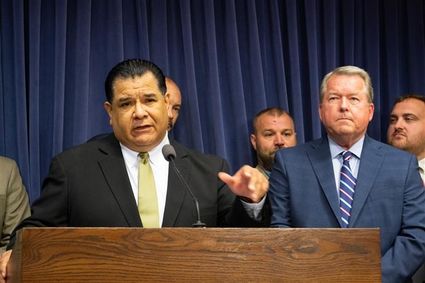 The indictment comes one day before lawmakers are set to return to Springfield for the 2020 legislative session.

Sandoval, a Chicago Democrat whose Statehouse offices were raided by federal agents in September, announced in November that he would resign his Senate office. His resignation took effect Jan. 1, and he has since been succeeded by former Rep. Celina Villanueva, of Chicago.

In a two-page indictment released Monday, prosecutors said that between 2016 and 2019, Sandoval, then acting as a state senator and chairman of the Senate Transportation Committee, accepted money in exchange for continuing support for red light cameras in Illinois and opposing legislation "adverse to the interests of the red-light camera industry."

If convicted of that charge, Sandoval could face up to 10 years in federal prison.

Red light cameras are devices installed at certain intersections that automatically photograph and issue citations to people who fail to come to a complete stop at a red light. The devices are operated by private companies on contract with local municipalities, and the companies typically share the revenue the devices generate.

The indictment also alleges Sandoval understated his income when he filed his federal tax returns for calendar year 2017. He claimed $125,905 in total income that year, the indictment states, even though "the defendant knew that the total income substantially exceeded that amount." A conviction on that count could result in a maximum fine of $10,000 and up to three years in prison.

The Chicago Tribune reported in 2017 that Sandoval personally intervened with the Illinois Department of Transportation on behalf of a red light camera company, SafeSpeed LLC, to allow the installation of a red light camera at an intersection in Oakbrook Terrace while at the same time accepting large campaign contributions from the company.

The search warrant that was executed on Sandoval's Statehouse office in September specifically listed items related to SafeSpeed and officials affiliated with the company as items the agents were authorized to seize. SafeSpeed was not mentioned in Monday's indictment.

That search warrant appeared to be one part of a sprawling federal investigation into political corruption in the Chicago area and Springfield that has prompted calls for wide-ranging ethics reform at the state level. In the wake of that probe, lawmakers last year formed a Joint Commission on Ethics and Lobbying Reform that is due to issue its recommendations by the end of March.

"This serves as a reminder of the challenge we face in restoring the public's trust and why that issue is a priority this session," newly-elected Senate President Don Harmon, an Oak Park Democrat, said in a statement Monday. "The searing image of federal agents toting boxes out of former Senator Sandoval's Capitol office was an embarrassment to all of us who take public service seriously."

"My office is taking decisive action in response to unethical arrangements that have come to light regarding the red light camera industry," Mendoza said in a Jan. 6 news release. "As a matter of public policy, this system is clearly broken. I am exercising the moral authority to prevent state resources being used to assist a shady process that victimizes taxpayers."

Those bills await assignment to a substantial committee in the Illinois House.