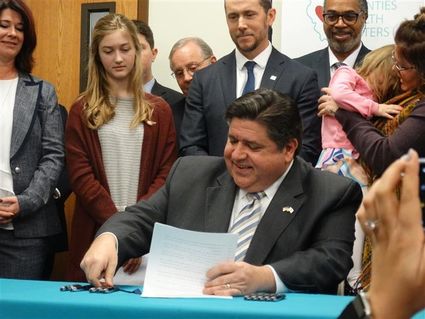 Democratic Gov. JB Pritzker signed a bill into law Friday capping the out-of-pocket cost of prescription insulin for many people in Illinois.

Senate Bill 667, sponsored by Sen. Andy Manar, a Bunker Hill Democrat, caps the cost at $100 for a 30-day supply, a significant reduction for many diabetes patients currently paying hundreds of dollars per month for the life-saving medication.

The law takes effect Jan. 1, 2021. Each year after that, insurers are allowed to raise the out-of-pocket cost by the rate of health care inflation.

"Diabetes affects people from all walks of life. It doesn't discriminate between those who can afford medication and unconscionable costs and those who cannot," Pritzker said during a bill-signing ceremony at a public health clinic in Springfield.

Megan Blair, a diabetes patient from Harristown, said she has frequently been forced to ration her insulin supply because she couldn't afford the $1,800 per month she was being charged.

"I've been in and out of the hospital, close to being in a diabetic coma more than once due to not taking my medication like I should – not because I wanted to, but because I had no choice but to ration the insulin I did have," she said.

Diabetes affects more than 30 million people in the United States, including an estimated 1.3 million in Illinois. According to the American Diabetes Association, it's a condition in which the body does not properly regulate its blood sugar level, either because it doesn't produce its own insulin, known as Type 1 diabetes, or because the body doesn't use insulin properly, which is Type 2 diabetes.

All patients with Type 1 diabetes, and many with Type 2, rely on regular insulin injections. Without them, they can suffer severe health consequences, and even death. But the price of insulin has been skyrocketing in recent years, nearly tripling between 2002 and 2013, according to the ADA.

With the signing of SB 667, Illinois became only the third state to cap out-of-pocket insulin prices. The law applies to people who are covered by health plans subject to state regulation. That includes most kinds of private insurance, the state Medicaid plan and the state employees' health plan.

It does not, however, apply to self-insured plans, which many large companies with thousands of employees offer. Those plans are regulated under federal law.

The law also does not limit what prices insulin manufacturers are allowed to charge for the medication. It controls only how much of an out-of-pocket cost insurers can require patients to pay, essentially shifting a greater share of the cost onto insurance companies.

I think one thing that we've all recognized in this process is there are an awful lot of middlemen that have caused a spike in the price and they need to work out among themselves how they're going to deal with that change," Pritzker said.

The law also calls on the Illinois Department of Insurance and the Department of Human Services to conduct a study of insulin pricing practices and the variables that contribute to the pricing of health insurance plans. The agencies are supposed to submit a report on that study by Nov. 1, along with other policy recommendations to control the cost of prescription insulin.