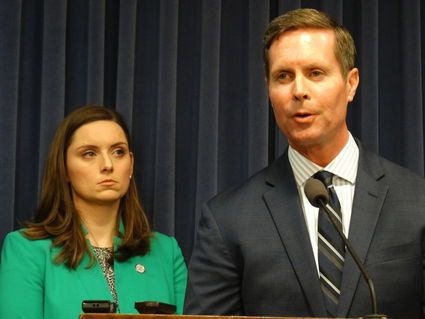 Democratic Gov. JB Pritzker and newly-elected Illinois Senate President Don Harmon added their voices Wednesday to a growing chorus of state officials calling for legislative hearings to determine how more than 500 people who identified themselves as non-U.S. citizens became registered to vote through the state's new automatic voter registration system.

"I think it's appropriate, again, for transparency, for getting all the information, so we know what went wrong," Pritzker told reporters during a news conference in Carbondale. "I don't think we need to be pointing fingers at anybody about blame. I think it's just, look, we have to get it right."

"We were told multiple times that this scenario would not and could not happen," Harmon, an Oak Park Democrat who was elected Senate president on Sunday, said in an email statement. "The secretary of state's office needs to publicly explain how this happened, what they've done to fix their mistake and convince lawmakers and the public it will never happen again. I think a legislative hearing would be a good venue to get that information."

Illinois lawmakers unanimously passed a law in 2017 providing for automatic voter registration whenever anyone applies for or renews a driver's license - provided they meet the qualifications for voting, which includes being a U.S. citizen. The bill was signed into law by then-Gov. Bruce Rauner, a Republican, and the program officially went live on July 2, 2018.

It was introduced by Springfield Democratic Sen. Andy Manar and co-supported by a number of bipartisan lawmakers, including Harmon.

But between that date and Dec. 13, 2019, Secretary of State Jesse White's office confirmed, as many as 574 people who self-identified as not being U.S. citizens nonetheless had their information forwarded to the Illinois State Board of Elections. Officials in that office said it resulted from a computer programming error and that the problem has since been fixed.

A spokesman for the elections board said it's not certain all of the individuals actually are non-citizens because some people accidentally check the wrong box on their applications.

Of those, however, 545 had their registrations finalized, according to the elections board, and 16 actually cast ballots in Illinois elections in 2018 and 2019.

White's office initially notified the elections board of the error on Dec. 18, 2019. It has sent notices to the affected voters advising them of the error and admonishing them not to vote. It is also working with local election officials to help them remove those individuals from their voter rolls.

Meanwhile, Republicans in the Illinois House began calling for hearings as soon as news reports about the error were published. And on Wednesday, they called for even more action, suggesting the entire program should be put on hold until officials can be certain such an error won't happen again.

"I think today we need to start the discussion about suspending the automatic voter registration program until we know for certain that this is being implemented correctly," state Rep. Avery Bourne, a Raymond Republican, said during a Statehouse news conference Wednesday. "We've heard about issues at the secretary of state. There were other agencies in the automatic voter registration law that were called on implementing this. It's our understanding that some of the agencies have and some have not."

Rep. Emanuel "Chris" Welch, a Hillside Democrat who chairs the House Executive Committee, said in an email Wednesday that he would agree to hold hearings after lawmakers return to the Statehouse Jan. 28 for the start of the 2020 session.

"As any mistakes affecting voter registration are very serious, I am calling representatives from the Secretary of State's office to come before the House Executive Committee next week in order to provide legislators with answers on how this occurred and clarify what steps are being taken to ensure it will never happen again," Welch said. "The Secretary's office has pledged full and transparent cooperation with lawmakers on this issue."

Suspension of the program would not prevent people from registering to vote at motor vehicle offices because that is required under a federal law known as the National Voter Registration Act, also known as the "motor voter law."

Bourne was joined by several other Illinois Republicans at the news conference, including Congressman Rodney Davis, of Taylorville, who said the problems that Illinois experienced could have national implications. He said that's because the Democratic majority in the U.S. House is pushing legislation to take automatic voter registration nationwide.

"We're seeing in states like Illinois, that have gone through motor voter decades ago, that there are still problems when it comes to implementation that need to be corrected," Davis said.

Davis and the other Republicans at the news conference said pointedly they did not believe the errors in Illinois were intentional and that their calls for legislative hearings were not meant as a criticism of Secretary of State White. They also said they still support the concept of automatic registration, but that it needs to be implemented accurately.

"The standard for AVR should be zero-percent failure and that did not happen here," said state Rep. Tim Butler, a Springfield Republican who also voted for the bill.