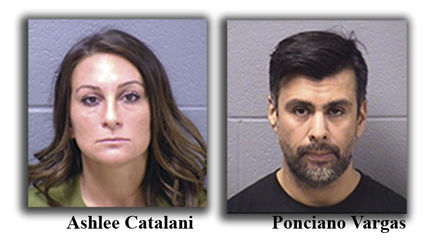 Courtesy of Will County Sheriff's Department

Thirty-three-year-old Ashlee Catalani and her boyfriend Ponciano Vargas, 40, were charged with six crimes in connection with the Dec.1 beating of Catalani's ex-boyfriend.

At approximately 5:14 p.m., officers responded to the 4300 block of Timber Ridge Court to an unwanted intoxicated subject.

"Vargas beat up the one male victim and Catalani proceeded to pull the hair of the female victim," said Sergeant Chris Botzum.

During the arrest, officers who responded to the call were able to determine that Vargas and Catalani, a math teacher at Joliet West, were drinking together earlier at a bar with the victims.

The victims left and went to a residence in the 4300 block of Timber Ridge Court, and then Vargas and Catalani at some point gained entry to the residence without the couple knowing.

Vargas and Catalani entered the bedroom where the victims were at, and for an unknown reason, Vargas began to batter one of the victims multiple times.

While Vargas was battering the first victim, Catalani began to pull the other victims hair, and the victim then got away from Catalani and hid in another area of the house.

As both Vargas and Catalani were leaving the residence, they began to damage property in the victim's residence.

Following the attack, officers located Vargas at this residence in the 2400 block of Ingalls and took him into custody without incident.

The Will County States Attorney directly indicted Catalani on Jan. 8, and issued a warrant for her arrest, where Catalani then turned herself into custody.

"We didn't get the warrant for Catalani," Botzum said.

"From talking to the detective that worked on this they had enough of what was in front of them at the Grand Jury to indict her also."

Following Catalani turning herself in, she spent Thursday Jan. 9 in the Will County Jail before posting 10 percent of her $15,000 bail money later that evening.

The Will County State's Attorney's Office charged Catalani and Vargas as co-defendants in last month's beating of Catalani's ex-boyfriend and his current girlfriend.