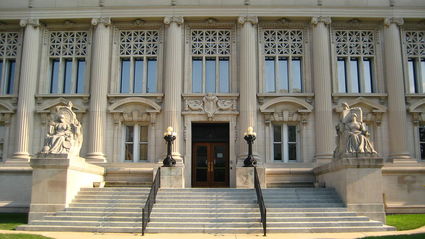 Two Illinois school districts defended their actions against an elementary school teacher and a restoration company before the Illinois Supreme Court on Wednesday.

The justices' eventual decisions could determine how school employees can use paid family leave, and whether contracts are enforceable if they should not have been signed in the first place.

Can paid family leave pick up after breaks?

Margaret Dynak, a teacher at Westview Elementary School in the Chicago suburb of Wood Dale, gave birth in 2016 with one-and-a-half school days left before summer vacation.

Illinois School Code allows full-time school employees 30 days of paid leave after a child is born. Dynak requested her remaining 28 ½ days of leave be applied to the start of the fall semester, but the Wood Dale School District denied her request because it was months after the birth.

Supreme Court justices will decide whether school employees can use paid parental leave on both ends of an intervening break in the school calendar.

The DuPage County Circuit Court ruled in favor of the school district in 2018, arguing Dynak's summertime birth does not give her "a right ... to sick leave at a future period in time." The Appeals Court agreed last June.

In oral arguments Wednesday, Dynak's attorney, Ryan Thoma of the Illinois Education Association, contended Dynak is entitled to all 30 days of her paid leave.

"She did not lose that right based on the happenstance of when her child was born," he said.

Thoma also argued the law's phrasing of "leave after an absence" means the 30 days of leave applies to consecutive school days, no matter where they fall in the calendar. Teachers are "only absent when they are expected to be at work," he said.

"Sick leave use must be tethered to the event causing the need to be absent from work," he said. "It can't be delayed 10 weeks, 10 months later down the road."

Thoma rebutted it is "unreasonable" to think school employees would game the system and take extremely delayed leaves.

"It's the focus of these employees requesting the leave to spend the time with their child," he said, "and the paid sick leave is there to ease the extreme financial burden of doing so."

Only six of the Court's seven justices were present Wednesday - Justice P. Scott Neville, Jr., was not on the bench.

Do public entities still have to pay void contracts?

In May 2014, a fire significantly damaged Proviso East High School in Cook County.

Proviso Township School District Superintendent Dr. Nettie Collins-Hart signed a contract with a local restoration and construction company, Restore, to fix the damage before students came back in the fall. A subsequent contract with Restore was signed later by Collins-Hart and school board President Daniel Adams.

Illinois law, however, requires that districts go through a bidding process for contract work, which also then must be approved by a vote of the full school board.

Restore finished its work and received, via the school district's insurance policy, about $5.8 million of the $7.3 million laid out in the contracts. By 2015, the school board halted further payments.

A lower court last year ruled the district liable for the remaining money. The Supreme Court will look at whether public entities must pay contractors if a contract was void from the beginning.

William Gleason, the attorney representing the district, argued Restore should have known it was not following proper procedures.

"That's what Restore chose to do here, was to proceed at its own risk," he told the six justices.

If the high court rules in favor of Restore, Gleason added, it would be a sign to companies that they need not follow the law.

"You haven't really encouraged compliance with the statute at all," he said, "because the contractor knows that no matter what happens, they're going to be entitled to remuneration."

"If you agree with them, you are incentivizing non-compliance," Rathsack told Garman.

"If I was on [the board of] a municipal entity, why would I bother to take the contract and approve it?" he argued. "(If) we're not happy, let's just say we don't have to pay him."

Gleason rebutted, however, that allowing Restore to get paid from these void contracts counteracts laws protecting taxpayer money.

"We ask this court to leave Restore exactly where it placed itself," he said.

Justices will consider the arguments before ruling on the two cases. There is no estimation on when rulings will be released, though the Court will be back in session March 9.