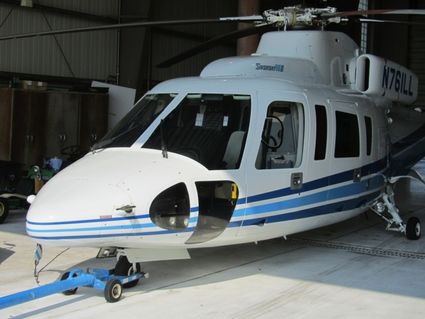 The luxury helicopter that crashed Sunday morning in California, killing all nine people on board including former NBA star Kobe Bryant, was once owned by the state of Illinois.

The Sikorsky S-76B helicopter was built in 1991, according to the Federal Aviation Administration's aircraft registry. The state of Illinois used it from 2007 to 2015, according to helicopter information database Helis.

Under the direction of former Gov. Bruce Rauner, the state sold the helicopter along with four other surplus aircraft in 2015 for $2.5 million. Rauner said selling the aircraft "also avoided an additional $1 million in inspections and repairs," according to an Associated Press story after the sales.

The winning bid for the helicopter was $515,161, placed by user "Jimbagge1," according to a listing on the state's online auction website, iBid. Both the aircraft and its two engines had just under 4,000 hours of airframe time when the copter was sold.

At the time of the crash, the registered owner of the helicopter was Island Express Holding Corp of Van Nuys, California, which registered it a month after it was won at auction.

The state of Illinois previously attempted to sell the helicopter in 2014, but receive zero bids, according to that auction's iBid listing.

A public information officer at the Illinois Department of Transportation, which maintains state aircraft, did not have any available information regarding the helicopter or its uses for the state.

The copter's information page on Helis, however, labels it as "VIP Governor."

A public information officer for the governor's office also did not have available information. A PIO for the Illinois Department of Central Management Services, which operates iBid, did not immediately respond to a request for more information.

Sikorsky is a subsidiary of Lockheed Martin, an American defense contractor.

One of his four daughters, Gianna, 13, was also killed in Sunday's crash. Bryant also leaves behind his wife of 18 years, Vanessa.

Also killed in the crash were John Altobelli, the head baseball coach at Orange Coast College in Costa Mesa, California, his wife, Keri and their daughter Alyssa.

Payton Chester, a 13-year-old basketball player, and her mother Sarah were also on board as well as Christina Mauser, a coach for the girls' team.