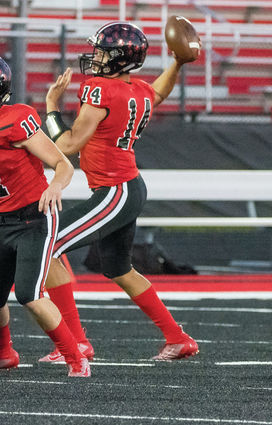 Hailing from a family of athletes, Suggs signed a letter-of-intent to play quarterback at Yale on Dec. 21.

Suggs and the other regional honorees will be honored on March 14 at the Crystal City Hilton in Arlington, VA.

"I'm beyond grateful to receive an award like this," Suggs said. "I hold success in academics very close to me. My dad raised me and my sister to value academic excellence. I'm very blessed to receive an award of this magnitude. I'm proud of my work and had a lot of people around me that helped me."

Suggs endured a rigorous process to earn the honor.

He had to fill out an extensive application that included an essay and detailed information of his daily academic and athletic life.

Suggs said he spent nearly a week on his application, but didn't hear about his award until a few months later.

Suggs, a dual-threat quarterback, led Bolingbrook to an 8-4 record this season and has a 3.8 grade-point-average.

"I was surprised and it's kind of shocking and humbling to receive this kind of award," he said. "Growing up, academics was very important in our household. We all took it seriously. My mom and dad instilled in us how important it was. To receive an award, outside of athletics, that recognizes my work as a student is very gratifying. There will be a day when football ends, and academics will open up many more opportunities for me."

Family is a key part of Suggs' life - and success.

At 6-foot-5 and 210 pounds, Suggs is an imposing and physical player on the football field.

But there was a time in his life when Suggs was more known for being the son of NFL and Ball State star safety Shafer Suggs - and the little brother of former Homewood-Flossmoor and Duke standout guard Faith Suggs.

Shafer Suggs, a member of the Mid-American Conference Hall of Fame, played five years in the NFL (1976-80) for the New York Jets and Cincinnati Bengals.

Faith Suggs had a standout career at Duke (2015-19). Shafer Suggs is slated to say a few words about his son's award in a Bolingbrook board meeting leading up to Martin Luther King Day.

"I'm really proud of Devyn," Shafer Suggs said. "To watch him grow through this years, and watch him observe Faith and navigate his own recruiting process and earn this award is special."

Devyn Suggs' path from younger sibling to star recruit, though, was not an easy one.

His mother, Susan Hoster-Suggs, passed away due to melanoma cancer on October 9, 2011. She was 44.

At the time, Devyn was just 10 years old.

He endured a rough few years, being forced to navigate his early teen years without the aid of his loving and supportive mother.

Meanwhile, Shafer Suggs, then 58 years old, had to raise two young teens through a difficult time amid a busy academic and athletic schedule.

"Devyn and Faith have always had a really close connection," Shafer said. "It's been truly amazing to watch them navigate the last eight or nine years together. Their mother would be so unbelievably proud of both of them, and would be so proud to watch him achieve this milestone and all these awards.

"We had to endure a lot, to be able to get through that rough time was helped because we are very spiritual people. We have all supported each other. We have been through some storms and endured them together. It was rough, just unimaginable what we went through. But our family was able to rise above those adversities because of our faith, our love and by working hard."

Devyn Suggs, no longer the little one in the family, credited his father and sister for guiding him through a difficult process of his life and help set him for athletic and academic success.

"I'm very blessed to have such a wonderful family," he said. "I've had many people in my life help me, from coaches, my dad and sister and friends and family to guide me to this point of my life. My dad's experiences in life and being able to show me what important really helped me. My sister has been a very good aid helping me and guiding me by showing me the proper way to about things."

Faith Suggs, now the director of basketball operations for the women's basketball team at Long Island University, said she's excited to watch her younger brother follow in the family's footsteps in college.

"It's so special to see Devyn achieve so much," Faith Suggs said. "His life has been the definition of overcoming adversity. I admire him every day for how he carries himself, and from the way he has always worked hard in the classroom is what I'm most proud of. I'm so excited for his next four years at Yale."