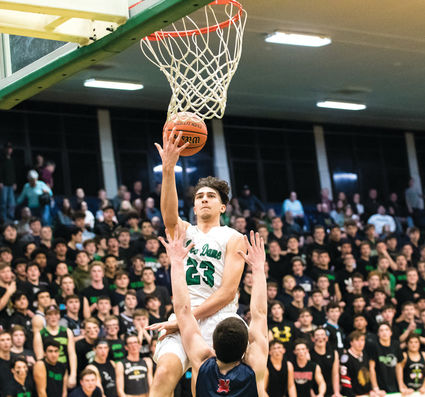 Louis Lesmond and Notre Dame have started the season off fast.

As they did against Fenwick on Tuesday, the vaunted Dons' defense shut down the high-scoring Lion offense Friday.

The scary part for the ESCC, and the rest of the state of Illinois, is the Notre Dame trio are all just juniors.

Sayles and D'Amico each scored eight first-half points leading the Dons to a 31-14 halftime lead.

The first two minutes of the third quarter of ND games will be forever known as 'Louis Lesmond Time.'

Lesmond, as he has done on numerous occasions this season, went on a personal 8-2 run in the first 98 seconds of the third quarter as he buried back-to-back three pointers and scored inside to give the Dons a 39-16 lead with 6:22 left in the third quarter.

D'Amico was a tower of strength inside, scoring 14 points inside and shutting down the Lions inside game with his great defense and shot-blocking ability.

"We all came out and did what we had to do to get the big win," D'Amico said. "We all took turns at taking over the game, which is what we do. We played great defense and Louis can get hot so fast. It's so much fun to watch him do his thing."

Lesmond just missed a double-double. with his 16 point, nine rebound night. With only one of his signature rim-rattling dunks, he went outside and hit four shots, from beyond the arc.

"Once again we did everything we had to do to come away with the win," Lesmond said. "My teammates always find me and put me in great position to score. I don't know why it happens always at the start of the third quarter but I just start hitting all of my shots."

Sayles scored eight of his 10 points in the first half along with D'Amico to give the Dons the huge first-half lead. Sayles also hauled down seven rebounds.

"We shared the ball, shot the ball well and played exceptional defense," Sayles said. "All of my success I owe, as always, to my teammates. We are team here at ND."

Enterprise Newspapers All-Area football selection and ND point-guard Jimmy Murphy also scored five points along with his three assists. Don sixth-man Mac Ross, as he always does, came off the bench to spark the Dons with five points.

The largest cheers of the night from the Notre Dame student section were for junior guard Jake DeFranza and senior Brian Pitts.

In the last minute of the game, DeFranza buried a three-pointer from Park Ridge and soon after, Pitts sent a Lion shot attempt flying out of bounds. The crowd went wild.

"Anytime you play an ESCC rival, we know we will be in for a grudge match," Notre Dame coach Kevin Clancy said. "With both us of us at 2-0, the game was an important early-season ESCC battle. I am so proud of the way we played defense tonight. We did to St. Viator exactly what we did to Fenwick on Tuesday."