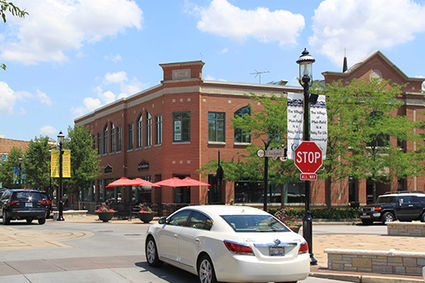 Plainfield now has an online map that provides historic information as well as direction.

The new feature is under Plainfield Historic Landmarks on the village website.

The Historic Preservation Committee has designated 20 structures - all near the downtown area - as having historical or architectural significance. All of the buildings are within four blocks of the intersection of Lockport Street and Route 59.

The committee evaluates the integrity of design, workmanship, materials, location, setting and feeling, and other criteria when designating a landmark.

The village has been designating landmarks for over a decade.

The Hartog-Smith House, built near the village green in 1924 was the first designated landmark and the Irwin-Rogman House on Bartlett Avenue is the newest. The Overman-Brown-Buss house on Illinois Street was also named a landmark last year.

The Plymouth Congregational Church is a landmark. The Opera House Building and the Masonic Building are two of the commercial buildings officially considered landmarks as is the Standard Oil Station, which retains the classic exterior of a 1920's filling station, but has been converted to office and retail space.

"This type had an appearance of a picturesque cottage, which was designed to link the structure to a family institution," map information states. "The station is also typical of the "house with canopy" type. Spanish and Mission style elements are also present with the tile roof."

The story map on the village website also contains links to apply for other buildings to be considered for landmark status.