Ban on lawmaker lobbying and revolving door limits among their recommendations 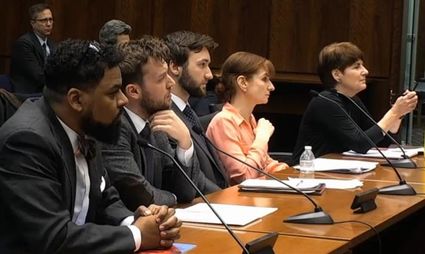 Government reform advocates in Illinois are urging state lawmakers to impose stricter rules on lobbying activity at the Statehouse, including a ban on lawmakers themselves working as lobbyists with other levels of government.

Their testimony before a special legislative committee Wednesday in Chicago came against the backdrop of a sprawling federal investigation that has focused in part on potentially corrupt lobbying practices.

Former Rep. Luis Arroyo, who also lobbied the city of Chicago, was forced to resign last year after he was indicted for attempting to bribe a state senator on behalf of one of his lobbying clients.

Utility giant ComEd has also been the subject of federal investigative activity. Chicago area news outlets have reported that the investigation has centered, at least in part, on ComEd's alleged hiring of politically-connected individuals in exchange for favorable legislative action.

"We need a concerted effort to restore Illinoisans' trust in government," Ryan Tolley, policy director for the group CHANGE Illinois told the Joint Commission on Ethics and Lobbying Reform during its meeting. "Undoubtedly, it has been shaken by the ongoing monthslong FBI investigation that is engulfing lawmakers, lobbyists and private interests seeking to influence our government for personal gain."

Tolley was part of a panel that testified before the committee in favor of stricter lobbying limits. The panel also included representatives from the Chicago-based Better Government Association, the Center for Illinois Politics, Common Cause Illinois and Reform for Illinois.

All of the groups urged the panel to recommend a so-called "revolving-door" law that would prohibit elected officials from going to work as lobbyists for a specified period of time after leaving office.

"We have seen how relationships between lawmakers, lobbyists and special interests can get too cozy, potentially promoting corruption and distorting the democratic process," said Alisa Kaplan, policy director at Reform for Illinois. "Implementing a revolving-door restriction would bring Illinois in line with the vast majority of other states and begin to draw healthy boundaries between the lobbying industry, special interests and the government, whose primary obligation should always be to the public."

The advocates also called for barring lawmakers from working as lobbyists at other levels of government.

House Majority Leader Gregory Harris, a Chicago Democrat, questioned how far that limit should extend, saying it could interfere with a lawmaker's ability to talk to local governments on behalf of a constituent. But members of the panel said that shouldn't be a problem and that a ban should extend only to working for pay on behalf of a private client.

Other recommendations from the panel included requiring lobbyists to disclose how much their clients pay them, something Democratic Gov. J.B. Pritzker has proposed but which lawmakers have not yet endorsed.

However, lawmakers did pass a bill during the fall veto session last year, Senate Bill 1639, that expanded other kinds of information lobbyists must disclose. That law also requires the secretary of state to maintain a searchable database containing information about their clients as well as their campaign contributions.

Other suggestions from the panel included a ban on what Kaplan referred to as "shadow lobbying," or attempting to influence legislation without interacting directly with lawmakers.

"Recent revelations about Mike McClain (a close confidant of House Speaker Mike Madigan), who according to press reports was paid more than $300,000 as a 'consultant' for ComEd after he stopped registering as a lobbyist, have raised the issue of so-called shadow lobbying," Kaplan said.

McClain was the author of a 2012 email uncovered recently by radio station WBEZ-FM in which he urged officials in then-Gov. Pat Quinn's administration to go easy on a state worker who was the subject of a disciplinary action because, "He has kept his mouth shut on Jones' ghost workers, the rape in Champaign and other items."

Pritzker commented on that email during a news conference Tuesday, saying he thinks it points to a deeper problem in the state's political culture.

"This McClain email is emblematic of a culture that has been poisonous in Springfield for far too long," he said. "Those who protect the culture, those who tolerate it, those who promote it, well they'll have to answer for their role in it."